The endless, perplexing, and ultimately essential question of whether writing can be taught 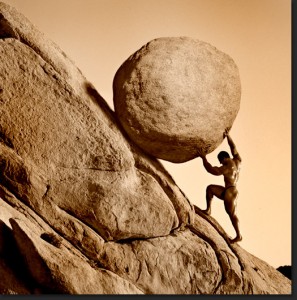 In this month’s Atlantic, Peg Tyre writes about a school on Staten Island that has “revolutionized” writing pedagogy: by going back to basics. Judith Hochman, who originally developed the very old-fashioned approach to writing pedagogy that New Dorp High School is now using, told Tyre that “kids need a formula, at least at first, because what we are asking them to do is very difficult. So God, let’s stop acting like they should just know how to do it. Give them a formula! Later, when they understand the rules of good writing, they can figure out how to break them.”

This seems like sound advice, but it’s not easy to implement. And it gets harder the older the students get.

I’ve taught writing to college students for nearly a decade, and in that time, a great many of them have told me they want to be professional writers. This makes sense: I teach journalism — reporting, magazine writing, cultural criticism — so the people who take my classes are a self-selected lot. Still, many of them lack the fundamentals that professional writing demands: a firm grasp on subject-verb agreement, how to structure a piece so that it leads the reader through and feels complete at the end, where to best place an attribution in a given quote. You might say they don’t have “the knack.”

And that’s the question: where does this “knack” come from, and can it be developed? Conventional wisdom would say no to the latter — that’s why it’s a “knack” — but without a satisfying answer to the former, it’s hard to accept that “no” as fact.

I always say that I learned writing during the summer between 3rd and 4th grade, when my parents struck a deal with my elementary school that if they spent the summer working through a year’s worth of reading and writing material, the school would bump me up to the highest reading group. I still don’t know why I wasn’t in the highest reading group before this, but I assume it had to do with some test that I took when I was six years old.

Other people would have different stories, some radically different. The crime writer James Ellroy writes in his memoir, My Dark Places, that he didn’t begin writing until he was in his 30s, after spending most of his life up until then either drunk, high on drugs, or eating takeout in front of the TV while his father was out carousing. But damn, he can write now.

Back to that unsatisfying “no, you can’t teach someone the knack for being a good writer.” Whether writing can be taught at all has long confounded educators and politicians alike. If a student doesn’t read, how can I teach them to hear the music of a beautifully crafted piece of prose? What’s the best strategy, Race to the Top or No Child Left Behind? Should schools do away with tenure, or offer it to more teachers? Can I make real strides with someone who doesn’t understand what a paragraph is?

Some time back, I asked in another post if “thoughtful” writing can be taught — essay-style, intellectually engaged work like that of Christopher Hitchens or David Brooks. That question is a luxurious one to ponder, both for a teacher and a student. The question I’m posing now is broader, and far more pressing: Can we teach writing to those who have little to no foundation from which to build? Think: immigrants whose grasp on the language is tenuous at best, college students who grew up in houses without a single book and parents who don’t read, people who are too distracted by work or lack of privacy to ever immerse themselves completely in a work of literature. (See Ginia Bellafonte’s excellent article from this weekend’s New York Times, “For Poor Schoolchildren, a Poverty of Words.”)

When I was in college, I read books upon books, essay after essay, en route to my bachelor’s degree. Now, 20 years later, I hesitate to assign readings much longer than a magazine feature, for fear no one will actually find enough time (or peace and quiet) to read them. With technology as ubiquitous as it is today — a distraction that most people can’t seem to wrest themselves from, no matter how hard they try — it’s certain that we’re never going back to a quieter, more contemplative time. But that’s another matter.

Back to adult learning: Can the so-called Hochman Program, however effective at New Dorp High School it might be, also be implemented in colleges and ESL programs, where adult students — often in their 30s, 40s, and beyond — have the same deficiencies as high school students in addition to the layers of time and age that make learning anything so much harder as we grow older?

That, as Hamlet might say, is the rub. But I have no intention of giving up on the effort, despite the ironic fact that the longer I try, the harder it seems to get. In many ways, the struggle is not unlike writing itself. I always tell my students that no one will ever be a perfect writer, and that the best we can do is to inch our way closer, word by word, sentence by sentence, and paragraph by paragraph until we die.

In this sense, the writing life is not unlike that of Sisyphus, consigned as he was to push a boulder up a hill for all time. But this should neither dispirit nor daunt a student any more than it should a writer. As Albert Camus writes in the final line of his famous retelling of that fable: “One must imagine Sisyphus happy.”

Previous post: Let’s ask again: What (and why) is creative non-fiction?