Can you teach thoughtful writing? 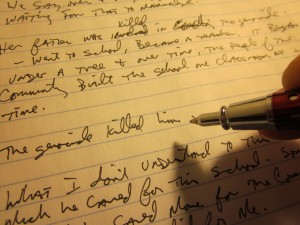 I’ve been teaching writing for about eight years now. I’ve taught rhetoric, freshman composition, magazine writing, newspaper reporting, and cultural criticism. Here’s the thing: I’ve never taken a writing course, or at least not since high school, when I took only what was required to graduate. In college and grad school, I studied literature, art history, philosophy, cinema studies… Content courses. I figured I could teach myself how to write cogently enough for the media, and I believe that I’ve done so.

But having such a background presents a real quandary: how to convey my process to others, and whether or not that’s even useful. Each course I’ve taught has presented unique challenges. In a reporting course, you need to make sure students are learning the basics of newspaper conventions: the inverted pyramid, proper attribution, the importance of sourcing your information. In magazine writing, you can be a little more flexible, considering the great variety in magazine-style writing out there, but it’s still about the packaging of information. In cultural criticism, a field far less defined than basic journalism, classroom discussions often turn into debates on ideas, not their articulation.

And that’ s where I struggle the most. Not because I shy away from nebulous areas of inquiry or lively discussions, but because I don’t know the best way of bridging the study of ideas with how to express them. Why should this be the case? I have studied ideas in earnest, and I have devoted years of my life to relating them to large audiences via magazine articles, blog posts, and even a couple of books about Web design — a subject I learned about as I ghostwrote those books, in a process I’d be hard-pressed to recreate, let alone explain to others now, these many years later.

Is it because writing, unlike a philosophical concept or piece of literature, cannot be studied as an object of scrutiny? It does not exist outside of us. We can’t sit around and analyze how a given essay came to be; we can only analyze what exists in that essay. Or maybe we can. Or maybe all we can do is try, and that is where learning occurs — in the effort to understand a process as personal, indefinable, and unteachable as how to create any piece of writing that conveys not facts, but ideas.

I write this just two days before beginning another course on cultural criticism. If past attempts are any indication, this one will take on a life of its own, determined as much by the players involved as by my own shifting ideas in how to engage them. And that’s a thrilling position to be in. A bit nerve-racking, but thrilling nonetheless. And maybe that’s the whole point.