by Amanda Leigh Lichtenstein on November 2, 2014 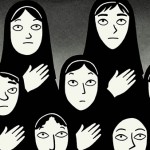 person to lean on.”

This past Friday, writer and filmmaker Marjane Satrapi spoke about her life to a room full of high school students at the First Methodist Church in downtown Chicago. As part of the Chicago Humanities Festival, Marjane agreed to talk with teens about her stunning coming-of-age graphic novel Persepolis — The Story of a Childhood, as well as all the other filmmaking projects she’s done since Persepolis was published in 2001.

If you haven’t read Persepolis yet, I’d say do it now or do it soon! If it’s been a while, revisit it. It’s one of the most heartbreaking, comedic, and insightful autobiographies ever written, and an incredible introduction to the world of graphic novels. Rendered beautifully in black and white frames, Satrapi reveals what it was like growing up in Tehran under an oppressive Shah with progressive, secular parents, and the consequences they all endured both during and after the Islamic revolution in the 70’s.

It’s the story of punk and love, revolution and change, anxiety and moving, faith and doubt. Satrapi’s unique story of growing up in Iran becomes, somehow, everybody’s story, as frame by frame she reveals the universal angst, fear, and wonder of teenagers everywhere.

It’s also one of the only novels I can think of that crushes American media-churned myths about Iran as some “Axis of Evil,” and invites Americans, who know very little about Iran or the rest of the world, to consider this particular politic from a very personal perspective. Outside of Iran, the United States — and Chicago in particular — is the only place where Persepolis was actually banned supposedly on grounds for depicting scenes of torture. Chicago Public Schools denies that the book was actually ‘banned’ but its politically-charged content was enough to cause alarm, and stirred international headlines for much of 2013.

This didn’t faze Satrapi, who is no stranger to censorship. She laughed at how when she looked at the list of those with whom she kept company on the U.S. banned book list, it made her feel cool. “What’s the first thing you do if you want a teen to read a book? Ban it!” Persepolis sales spiked as a result and she was pleased to see a surge of renewed interest in her work.  Satrapi commented on the absurdity of U.S. censorship laws — “how you can show the bloodiest, most violent scenes, but if you say the word ‘fuck’ twice, your film is labeled PG-18?!”

Following a half-hour interview with Chicago author Rebecca Makkai, who mostly focused on the ban, Chicago high school students took the mic, asking fiery questions about god, politics, philosophy, love and the creative process. The large assembly hall buzzed with adoration for Satrapi’s brazen yet tender approach to reality and all its contradictions.

When asked about the moment she knew she had to tell this particular story, referring to Persepolis, Marjane replied that it was the story she kept telling over and over again to friends, family, and colleagues. It was the story that insisted on telling itself, and yet, for many years, she admits that she was “too angry” to actually write about her life. Time cooled her sorrow and anger, and she eventually obliged and got started.

It wasn’t necessarily an easy or obvious process. “What’s obvious to the writer is not always obvious to the reader,” she explained. She puzzled over which frames needed text and which words were images. “Drawing is the first human language.” She wanted to write what was not yet in the frame and draw the story that had not yet been told. Writing, according to Satrapi, is not what you say but how you say it. It’s about finding your own particular language, and in doing so make even the most ordinary actions become extraordinary.

When French filmmaker Vincent Paronnaud approached Marjane to create a film version of her graphic novel, she was not exactly convinced that this was what she wanted. As a filmmaker, she hardly ever watches her own films after completing them, and didn’t have any intention of transforming Persepolis I or II into a film. “It was like a child being handed a toy,” Satrapi said of this opportunity to make the film. “I couldn’t resist playing with it!” There was no other reason to pursue it. The film was later critically acclaimed, winning the Jury Prize at Cannes (2007) and nominated for Best Animated Film at the Academy Awards.

Though Satrapi has gone on to produce a wide variety of other creative works, she is best known for Persepolis in the United States, perhaps because it pressed down hard on the bruise where the political meets the personal. What is the one thing Satrapi wishes Americans really knew about Iran? That Iranians are human beings. Not some abstraction on the Axis of Evil. “Persepolis was my answer to ignorance. What is evil? Ignorance.”

Satrapi laments the ways in which international politics have reduced human beings to circumspection and accusation. “It’s our human nature — the less we know about a place, the more sure we are of that place.” She hopes that all of us seek knowledge — not just about Iran — but anywhere — before we talk about it with any sort of moral authority.

One by one, teens took to the mic to ask questions that became more tender and deep as the hour wore on, asking for her advice and opinions on god, morality, and coping with life itself. Satrapi, completely at ease with teenage angst, took on these questions with the edge, humor & fearlessness of a wise, eccentric aunt.

In response to one girl’s question about how she dealt with major loss in her life, Satrapi states simply, “People — they leave. We know this. It can destroy you. Or it can motivate you to continue to survive. There is no human being that likes being tortured and killed. Every living thing wants to survive.”

Her ultimate advice to teens? (and really — to all of us):

Stop thinking everyone has to love you. Put humanity at the center of everything. All living things are on a search to justify their lives through god. But our love of freedom should be superior to our own convictions. Morality is extremely relative, warns Satrapi. Don’t listen to what anyone says, not your parents! Not your teachers! Don’t even take her own advice. Consensus is always mediocre. You want a revolution?

Let it be a revolution of ideas.

Next post: From blindness to beauty, Layla Love’s photographic journey