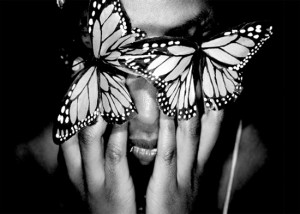 In 2008, the photographer Layla Love was told she’d be blind within one year. The cause: pharmaceutical medications she’d been taking since she was a child to combat the deleterious effects of Dystonia, a rare neurological disease whose symptoms are nearly identical to Parkinson’s disease.

Love was devastated. Since she first picked up a camera as a little girl, Love saw the world through its lens. “I was always in the dark room,” she says. But her daily medication regimen had wrought havoc on her eyes: She had 20 lesions on her right retina and several on her left as well. The visual world she’d spent her entire life documenting was, quite literally, closing in on her and going dark.

The news could not have come at a worse time in the young artist’s life. After doing photojournalism stints in Croatia, Vietnam, Japan, and Darfur, among many other places, Love was starting to show her work at A-list galleries and attracting both critical and public praise. She had just completed a 50-city tour and she was making important connections in New York City.

But the prospect of spending the next six years on steroids in a vain attempt to reverse the course her doctors were certain she was on scared Love far more than the prospect of leaving New York. So she moved to California and began researching natural ways of saving her eyesight.

Today, she has weaned herself completely off of medication. And she can still see.

So Love decided to do what she does best: document her journey. For the past few years, she has been working on a book about “super foods” and other natural remedies, incorporating her own life story and photography.

Scheduled for early 2015 publication, The Art of Transformation combines a variety of herb- and food-based detox formulas with Love’s own experience of saving her eyesight with “naturally occurring herbs that grow on a vine” – namely Macuna, a versatile herb that grows in the tropics and has been used to treat maladies ranging from Parkinson’s and tuberculosis to edema and urinary tract infections.

“For a while I just wanted to explore beauty and surrealism,” Love says of her early fine art work. “I’d done so many stressful projects in Darfur and Croatia and Vietnam, and I just wanted to do beautiful work. But now, more than ever before, I want my art to contribute to healing the world.”

Love says that before 2008, she never spoke about her condition. But now, she sees it as her “duty” as an artist to translate her experience for the benefit of others. With approximately 70 percent of Americans taking at least one prescription drug, Love considers her latest project an act of social justice. “I think this is something I have to share,” she says.

But Love has no interest in scaring people. Rather, her goal is to “change the system” and to work toward finding solutions. “Beauty is reality and it’s a portal and I’m grateful to create it,” she says. “But to me, contact with real life and what’s going on and the ability to effect change through storytelling is the most powerful thing we can do as human beings. I find it hugely important.”