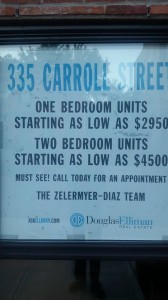 Last spring, my girlfriend of six years and I split up. She moved out of our below-market two-bedroom apartment in Park Slope and I had to decide if I was going to keep it, which would require getting a roommate – not an appealing prospect at age 38 – or find my own place. So I went apartment hunting.

My options were even less appealing than finding a roommate, and adding insult to injury, many of those unappealing options were, for me, not even options. One day, while standing in a dismal, one-room studio facing a brick wall next to a train track in Brooklyn, the broker asked about my income. I told her it varies – I am a freelance writer and adjunct professor – but I average between $50,000 and $65,000 per year.

The broker winced. “Can you get a guarantor?” she asked.

In May, Mayor Bill de Blasio announced his 10-year plan to create more affordable housing throughout the five boroughs. With a projected investment of $41 billion over the next decade, the plan promises to create or maintain more than 200,000 units, some for families earning less than $25,000 per year.

It’s a step in the right direction, but it won’t stop New York from becoming an increasingly impossible place to live for the middle class, and in 10 years’ time, the city will likely be even more of what it already is: A playground for the rich with a few token lower-income hangers-on mixed in for good measure. Meanwhile, most average New Yorkers will have no choice but to leave New York – and with it, their jobs in education, the service industry, and myriad other sectors that any city, quite frankly, cannot function without.

Where will all the bankers and corporate lawyers eat, get their shoes shined and send their kids to school once everyone who performed those roles has been priced out and fled New York for places they can actually afford?

There’s an easy way to reverse this trend, however, and it would not take 10 years to accomplish: Outlaw the use of guarantors on apartments.

New York is one of the only cities in the United States where landlords not only accept guarantors, but where it’s practically standard practice. If a prospective tenant does not earn 40 times her monthly rent, or if she does earn that much but doesn’t have several years’ work experience, or if she works as a freelancer and cannot show a stack of identical paystubs over an extended period of time, she may be asked to find someone to co-sign her lease, effectively guaranteeing that if she can’t pay the rent, then someone else will.

But what began as a safeguard against deadbeat tenants defaulting on their rent has become a convenient way for landlords to charge whatever the market will bear – and in the case of New York, as astronomical rent increases across the city have proved in recent years, the “market” will bear a great deal.

And there’s the rub: The New York real estate market bears no relationship to what most people in New York actually earn. According to 2012 census data, the median household income in Brooklyn is less than $45,000 per year, while in Manhattan it’s less than $67,000. Citywide, most households survive on less than $58,000 per year.

And yet, the median monthly rent in Brooklyn is $2,800, and in Manhattan it’s $3,100. Based on the “40 times the monthly rent” rule that most New York landlords adhere to, such rents suggest that the median household income in both of those boroughs should be over $100,000.

So how are people renting apartments?

In many cases, they’re obliging the landlords and finding guarantors, people who may live hundreds or even thousands of miles away. They own auto dealerships in Houston, practice dentistry in Syracuse, manage hotels in Dubai. Aside from helping their children, nieces, nephews or friends rent apartments in New York, in other words, they do not contribute to New York’s economy. They don’t shop in its stores, eat in its restaurants or draw paychecks from employers within the five boroughs.

Meanwhile, those residents who are part and parcel of the New York economy – people who live here, work here, shop here and even own businesses here – are increasingly unable to rent apartments here because they are competing with others who can prove, on paper, that they have access to great supplies of someone else’s money, even if it’s on distant shores. Landlords are thus able to rent studio apartments for more than $2,000 per month. If one applicant earns $60,000 per year and another earns $40,000 but has a guarantor, applicant B gets the apartment. Never mind that applicant A earns more than the median household income for all of New York City.

This is not only unfair, but also unsustainable.

I told the broker that no, I could not get a guarantor, but that I was 38 years old, with 17 years’ spotless rental history, excellent credit, money in the bank, and a resume showing continuous employment with numerous reputable organizations – all of which are based in New York, suggesting that I earn what the market has decided a professional writer and part-time professor in New York City is worth. She answered that the landlord would still require a guarantor.

As I walked home across Prospect Park, in the rain, I thought back on my adult life in New York City: I moved here in 1999, at age 24, and I’ve weathered two recessions here, arduously built my career here, and devoted the last nine years of my life to teaching my craft – writing – to students at one of New York’s oldest public colleges. I thought about my beloved Prospect Park, where I’ve trained for 20 marathons, including three New York City Marathons, and the many friends I have scattered throughout the city. I thought about where I could live, if not here.

I did not apply for that or any other apartment. Instead, I got a roommate – a 38-year-old post-doctoral student from Sweden. While he is a perfectly agreeable roommate, it’s not the kind of life I imagined for myself at age 39. And it’s not one I care to continue. When he moves out next summer, I might follow his lead. Not because I want to, but because I won’t be able to afford my home on my own.

And if I do, who will take my apartment? An educated guess would suggest either an investment banker or a 22-year-old with a wealthy father in Ohio. Because as far as the New York real estate market is concerned, they’re essentially the same thing.

Previous post: English majors fare just fine on the job market, but in what jobs?