English majors fare just fine on the job market, but in what jobs?

A few days ago, a friend of mine with a tenure-track English professorship at a large southern university posted an article on Facebook that argued, basically, that humanities majors fare no worse in the job market than other majors. The data came from a study conducted by the Georgetown Center on Education and the Workforce, and covered the years 2010 to 2011.

As a holder of two degrees in the humanities, one of which I’m still paying off 12 years later, I was intrigued: Had I been doing something wrong during those wayward years right after college, when no one seemed to care that I’d read Foucault as an undergraduate, and to survive I worked as a professional demolition man, a sandwich maker, a house painter, a waiter, and an unpaid intern until I finally, at age 24, landed a job as a fact-checker at monthly business magazine at a salary of $32,000 per year?

To look at the numbers, you might think so: 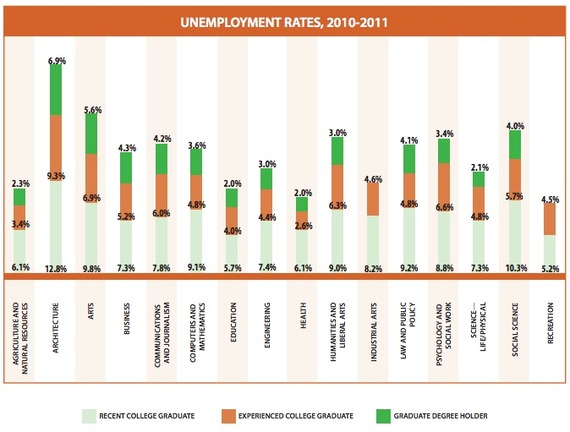 According to this chart, it’s a good thing I didn’t study psychology, journalism, or worst of all, architecture. Those poor kids who read The Fountainhead in high school and went off to university with dreams of conquering the world, Howard Roark-style, must be pretty pissed.

But then I realized that I’ve been working since the day I graduated from college. Again, I’ve been a demolition man, a sandwich maker, a house painter, a waiter, and an unpaid intern. And that’s where statistics like this fail to paint an accurate picture of post-college life: Just because someone reports being “employed” doesn’t mean they’re employed doing anything remotely connected to what they studied.

Perhaps all of those aspiring Howard Roarks are simply less willing to compromise their ideals — and of course they are if they’re modeling their lives off of an Ayn Rand character — than people who spent four years studying the human condition. After all, if studying the human condition teaches you anything, it’s that human beings are broken and life is a struggle, so why should your life be any different? Humanities students understand that having fancy degrees does not mean they’ll get fancy jobs — the history of human civilization has proved that.

So no, humanities students do not fare worse in the job market than other majors. But contrary to what Jordan Weissmann contends in her piece for The Atlantic, this should not be used to “win students back from the clutches of political science and econ.” Rather, it should be held up as a testament to humanities majors’ willingness to work, period, and their implicit understanding that life is hard. In short, their humanity.

Previous post: How a new Autocorrect program could hijack your soul