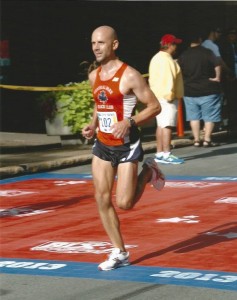 There are two things most people I know hate to do: Writing and running. While very different activities — one cerebral, the other physical — the primary reason people hate them is the same: They’re hard.

And not just hard, but very hard. And they hurt. Also, they’re boring.

Wait. What? I get that they’re hard, but how can something that hurts also be boring? You may not like something that causes pain, but does that mean it’s dull? On the contrary, what could possibly be more engaging than torture?

Then there is a small minority for whom a morning run is the best part of their day. And I know some people — though a much smaller number than those who run — for whom writing provides an essential outlet, a means of giving shape and meaning to the chaos of their lives. But that doesn’t mean that either one is easy — quite the opposite.

This week Rachel Toor wrote about the connection between writing and running in the Chronicle of Higher Education: “Both require bravery, audacity, a belief in one’s own abilities, and a willingness to live the clichés: to put it on the line, to dig deep, to go for it. You have to believe in the ‘it,’ and have to believe, too, that you are worthy.”

Coincidentally, just a few days before Toor’s article was published, the New York Times ran a piece about a study performed at the University of Greifswald in Germany, in which fMRIs were conducted on 20 serious, experienced writers while they crafted pieces of fiction. The researchers found their brain activity to be remarkably close to that of “people who are skilled at other complex actions, like music or sports.”

The key, it seems, is not physical predisposition, but expertise. People who do something a lot tend to show the greatest brain activity while doing that thing. No wonder they like it. It’s part of who they are.

I started running around the time that I decided to pursue a writing career. I was 23 and lost. I had a degree for which there was no job after graduation. I was still smoking off and on, something I’d picked up as a teenage affectation that turned into a habit. But I believed that if I focused my energy and worked hard, then good things would follow. Running provided that focus, and while it didn’t help me write, at least not at first, it did help me pursue a career. In other words, it helped me get my shit together.

Now, some 16 years, 21 marathons, 30,000 miles, countless articles, and two ghostwritten books later, I can confidently say that my writing and running careers have fed each other my entire adult life. I turn sentences around in my head while I’m running, and when I hit a creative wall while writing I channel the hard-earned wisdom of my sport: You’ve been here before, and soon you’ll be in a better place — just keep going.

Yes, writing and running are both very hard. I compare writing to laying brick, and running to the myth of Sisyphus. But they have also taught me bravery, audacity, and to believe in my own abilities, that I, too, am worthy.

But to anyone who says they’re boring, I say this: Keep going.