Black and White and Blue All Over

What’s black and white and blue all over? A magpie! I should know. My best friend was a magpie.

We met when I first went to France. Each day I followed the same forest trail that led me to my favorite spot in the world, a hillside abbey built in the 13th century. I loved the walk, the smell of the trees, the sound of the birds. Except one. There was one bird, a magpie, who took great pleasure in teasing me. Each time I walked past, he would chatter at me loudly. “Shut up,” I told him. I don’t like bullies. But the next day, there he’d be again, laughing at me.

Then he started really messing with my head. Literally. He’d fly over my head, back and forth, dive-bombing so close that I could feel the air as he flew past. But I’ll be damned if a bird is going to get the best of me, so I pretended not to notice. It was when he flew right in front of me, like right in front of me, and fluttered, that I finally lost it. I swung blindly screaming, “LEAVE ME ALONE!” The magpie flew to the tree and watched as I collected myself. “Listen,” I told him, once I’d calmed. “You can fly next to me or you can fly over me. But do not fly right in front of me. It freaks me out.” As I resumed my walk, clutching what remained of my dignity, the magpie hopped on the ground next to me. To be honest, it was nice to have the company. I was alone in France and didn’t have anyone else to talk to.

Once at the abbey, I settled down to my favorite view of the valley below. Suddenly, the bird landed on my head. I screamed bloody murder and ran around the church grounds swearing and swinging at the air. People turned away disapprovingly from the crazy woman surrounded by a blur of black and white and blue. He laughed but it wasn’t funny. After that, we fell into a routine and a friendship grew as we spent many a happy afternoon meditating at the abbey and talking about all those things that you talk about with a bird.

It was many years before I was able to return to France again, and the first place I wanted to visit was the abbey of course. As I walked the familiar path I heard a cackle from above. A magpie in the tree. No, I thought, it was impossible that my friend was still alive. I tried to coax the bird down but it refused. Was it him? Was it my friend? I would never know. With a sad sigh, I turned to go. But something fluttered from the sky and landed right on top of my foot. It was a feather: black and white and blue all over. 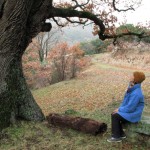 Previous post: How to break up with an island