How to break up with an island

by Amanda Leigh Lichtenstein on October 6, 2013 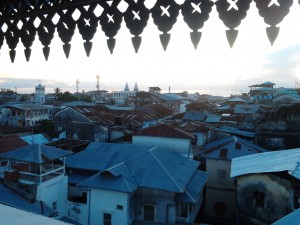 Step #1 — Unfairly blame all your unhappiness on the island. And then realize the island is YOU.

Many of us spent our days trying to explain the inexplicable of Zanzibar. A vortex, a magnet, a spell. It’s the tiny island with an epic history, whose trade winds speak the language of spirits. It’s a pool of heartache, a broke-down beautiful day-dream, an electric carnival of eccentricities.

Those who live here, even for a brief moment, attempt to hold on, to ride it like a bucking bull of culture. We fall off, and we get back on. We live in an overcrowded spirits’ playground, where conflict between humans and jin generate tensions between worlds – all of us reaching across and through them to survive. There is friction, inertia, repulsion and attraction. We never and always want to leave and return. It is a condition, the Swahili state of mind.

We can recognize and respect its potency — a heady mix of unprecedented tenderness and degrading callousness. We shake our heads, contemplating the daily mingling of spirit and human worlds, resisting pulses of rage and madness in exchange for the sea’s turquoise calm. Ocean waves hypnotize us. We flirt with night stars. We’ve been gripped by its undeniable pull, and we stay.

I arrived in Zanzibar planning to stay for four months and reluctantly left nearly four years later. How did I get there? I followed that invisible Swahili trail to its epicenter, where pride and shame clash daily for space. I can’t say I know Zanzibar, but I somehow grew to know Stone Town, its sour and sweet corners, labyrinths of moon-soaked history, its mockery of itself as a culture resisting other cultures while at the same time beckoning, reconciling, consoling, cajoling. For its size, it emits the most powerful, contradictory forces. Restlessness, rage, melancholy, Eros – snakes of desire and charm slithering through the grass of collective consciousness.

Step #2 – Enter a Shit Storm of Controversy and Petty Frustration, and Find Beauty in this Too.

Stone Town encounters often got retold as a litany of petty frustrations by day’s end. You either had to laugh it off or hide and cry. I learned to sing in the faces of those who enraged me and we became family, and this was a beautiful thing.

I was also taken on a wild legal ride of accusations and interventions, blind-sided by the gut-wrenching kicks of love gone wrong. It was a bit of a disaster. My privilege ushered in an unabashed trust that did not translate. I called it love. I was a cliché of a cliché living out the residual after-shocks of this awakening for years after the relationship ended. Our mutual yelp was heard in all civil and legal corners of the island and spun me out into the cavernous reaches of local police outposts, the brand-new-but-falling-apart labor commissioner’s office, and the sheha’s ruinous room. I learned to fight in Swahili. I studied labor laws. I learned to speak with my lawyer in Swahili legalese. I defended myself, wrote and stamped letters, sat in humiliating meetings in airless rooms.

I know you have questions for me.  What happened? In true Zanzibar-style, answers will not be revealed here. Others will have to pull you aside and whisper what they think they know about me.

By the time I left, I was on a first-name basis with the police. I found refuge in poetry and a circle of extraordinary friends. I had my embassy’s number on speed dial. I changed my locks. I negotiated with ghosts and healers. I caught lifts from female officers who escorted me on their scooters to the court house. I gained the sympathy of judges who made sly marriage proposals when we weren’t talking about my case.

Some people listened and believed me. Others dismissed me. A few of his family members tossed me to the sharks. Others greeted me on the streets as if I was his wife, even after it was clear that we’d been torn apart by alcoholism, poverty, hopelessness and jin. Friends came to the rescue. Others detached, denied, distanced. To reveal one’s secrets is social death. There are no secrets on the island, though.

There was a kind of beauty in knowing that my heart had to grow like a weed in this harsh sunlight.

I delivered formal thank you speeches to my university colleagues at least fifteen times. I apologized formally and informally several hundred more times, on and off the record. Samahani. Nisamehe. I offended people with my enthusiasm, therapy-informed listening style, curiosity, demands, and questions. I enraged colleagues with my criticality, directness, and insistence on egalitarian collaboration and process. My status as an unmarried woman without children begged the question: where did I get the audacity to direct and demand?

Deadlines were missed, I screamed. Translations were lost. I yelled. Money was stolen. I accused. Repairs were neglected. I blamed. Shit piled in the toilets. I winced. The office caught on fire. I ran. Syllabi were left unedited. I cursed. Men grabbed me. I spat. Technology broke down. I stalked the fundi. Sewage overflowed. I muttered. Tumbatu ladies held us hostage. I implicated the old poet. Online banking broke. I shouted. They threw tear gas. I judged. Separatists? Good luck. People pushed and shoved. I cut in front. Promises were broken. I cried. I reprimanded staff. They cried. Documents were stapled upside down. I sighed like a monster.

I am so sorry. Samahani sana.

(I still love who I love. I won’t apologize for that).

Step #4 – Release Yourself from the Panic of Thinking You Matter.

I mattered and I didn’t matter at all.

Step #5 – Vow never to return, and then immediately make complex plans that demand your eventual return.

Everyone asks me why I left Zanzibar. Who leaves paradise? I left because it was time to get off the island. How many of us can truly grasp the intractable incongruity of fact and fiction? Was it hard to leave? Yes, and necessary. My last memory is dragging two suitcases down Sokomuhogo to my waiting taxi and stopping to bawl into my neighbor Mama Chemsa’s bountiful chest. Yes, she’s the one who fries the best potato and cassava chips on Sokomuhogo Street. Yes, I wept.

I wept for Jaw’s corner. Cold lime juice. Bao rules. I wept for old men in kanzu. The jaunty high-pour of coffee from pot to porcelain cup. Men who spit and cycled barefoot. I wept for the madmen and the Rasta men and the panga men and the acid attack men and the heroin addicts and the Imam. The travelers trapped in their trappings. I wept for black Buibui and fancy plastic flip-flops. I wept for Asha’s patience with me. Fatma, who sold bajia and kachori wrapped in sheets of Arabic language newspapers, her laughter, her wide-set eyes, a thousand scarves. Khadija, whose wedding I’d miss. Hafiz, the boy I loved like a son. I wept for the sun.

I wept for Bi. Kidude’s lost songs. I wept for John Da Silva’s undeveloped negatives.  I wept for my rambling talks with Haji Gora. The mean ladies of Tumbatu. The slow, lonely amble of my life. For time like taffy. I wept for hours spent holed up in the palace. I wept for the baraza — shit, roaches, and mango pits. I wept for the war I lost to rats. The routine surrender to a tropical Sunday. Sunday crepes and coffee. Sunday tibs. I wept for all the invitations I declined. All the Swahili weddings I turned down. I wept for those who reached out. I wept because none of us opened up until I was leaving. I wept for all the lies being told about Zanzibar, and the lies I told myself about Zanzibar and the lies we told each other, about everything. The pent-up rage of the place. The impossible promise of the place. The unfair demands we place on it.  The deep and utter dysfunction of the hour.

The enormous, immeasurable divide between rich and poor. Every one of us, sleeping, in the shade of history’s onerous glare. I wept for the young ones with no power but lots of free meals and sex. For the riots and the tear gas and the broken glass. I wept knowing that the one I loved would probably never read or understand my essays. I wept for all who fumbled in that vacuous despair of language. I wept because “all language is predicated on loss.” I wept for the brutal fact of class and condescension. The exactitude of well-meaning foreigners and their blogs. The drunkenness. The longing to belong. I wept for righteousness, for those who thought they could speak with any authority about “Africa.” For all of us who thought we could be categorized as exceptions.

And then immediately made plans —- to return.

Step #6 – Leave & Linger in Proximity, Close Enough to be Far Away

Next post: Black and White and Blue All Over