Review: In The House Upon The Dirt… 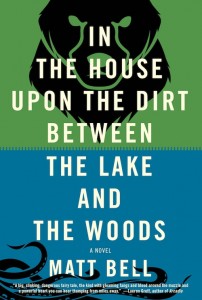 Matt Bell’s In The House lingers, even as you finish it and walk away. It collects and gathers like a storm, and explodes into wild proportions. It is a painful novel, full of effort and blood. The rough and angry protagonist rages and thrashes throughout the novel. Whether fighting a bear, or destroying his own child, he is an implacable force. Equally, the wife of the story earns her place in the novel as a powerful presence. Centuries of storytelling have left us with the typical fabulist female used as a device to define the male characters in the story, with no real definition of her own. In this novel, the wife intrigues more than the husband, partly because the tension of the novel hangs on what she desires, and how she navigates disappointments. Her magic draws the protagonist through his journey, and once again brings him into the burning center of her life.

In The House is a fairy tale—animals transform; humans possess magical powers; spirits haunt. Unlike other fabulists, Bell employs restraint in his style, saving the novel from hysteria. In a less gifted writer, the disorienting corners and mythical depths would be irresistible territory for overwriting. Bell brings us to those depths with crispness and clarity by using phrases that loop as musical refrains throughout the book. These loops create a lovely rhythm to his paragraphs. For example, “where when we came we came alone” and “for even our bones had memories, and our memories bones.” Bell also uses litany to build tension in his scenes. For example, in one particularly potent section, the protagonist describes the room his wife has created: “And in this room: my the entrance to the cave at the center of the woods, marked by her footprints in the muck, headed in. And in this room: my wife traversing the many chambers of the bear’s cave….” This motif repeats in several places, as a composer would use crescendo.

The great danger in Bell’s novel is that he unleashes so much misery, page after page. His characters endure grinding physical pain, dark regrets, and terrible failures. If In The House is a fairy tale, it is in the old Grimm tradition, stripped of the saccharine and glitter of Disney—as rough on its reader as it is on its characters. At times the book overwhelms with its grief-laden turns and dead ends. Bell’s hand becomes a bit heavy on the violence, particularly with the repetitive flesh-ripping fights between the protagonist and the bear.

But pulsing and glittering at the bottom of all that misery is a quiet kind of hope in the love that is buried and unearthed between the protagonist and his wife, a love that leads the reader back to the dirt, back to the woods and lake, and, in the end, lets us all rest if not comfortably—for that is absent here—at least peacefully. For all of that misery, the reader is still rewarded with the fire and song of this fine novel.