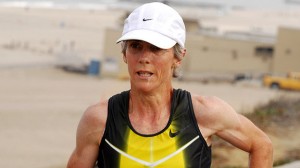 You never know when someone will say something, however simple and off-hand, that will stay with you for the rest of your life.

Yesterday afternoon I attended the pre-race luncheon for the elite field and sponsors of the 2013 Bix 7, a 39-year-old race in Davenport, Iowa that’s grown into one of the largest and most famous non-marathon races in the world. (I was fortunate enough to write about the race for the July issue of Running Times.)

Athletes come from as far as Japan, Africa, and Eastern Europe to run this hilly 7-mile race on the banks of the Mississippi River. But none are more famous than the veritable king and queen of the Bix, Bill Rodgers and Joan Benoit Samuelson — both Olympians, with 60 Bix 7s between them, and both among the humblest people you’ll ever meet.

Froehlich went on to describe her mileage in the days leading up to the race: she ran 5 miles that morning (Friday), 10 miles on Thursday, and 16 miles the day before that. “And she’s not jogging, folks,” he said. With that, Froehlich shook his head, glanced at the wiry woman in her signature white cap at his side, and said, “I keep telling her, ‘Joan, you don’t have to do this anymore. You don’t have to run so hard, you can take it easy now.'”

To this, he told the small crowd gathered in a banquet room at St. Ambrose University in Davenport, Joan always replies: “I’m running. I’m running.”

Two words: I’m running. And yet, those two words speak volumes. They reflect a mentality and an approach to life that makes someone like Joan Benoit Samuelson exceptional.

In her view, if she’s going to run, she’s going to run to the best of her ability — and she takes joy in it, in the feeling that comes with moving your feet so quickly and so efficiently that, for brief moments, you can actually feel weightless. And she’ll do it for as long as she can, defying age and expectations and whatever else might threaten to slow her down, whether real or imagined.

We celebrate elite athletes because they remind us that even when something is very, very hard, having the discipline, perseverance, and desire to do it to the best of our ability gives meaning to our lives. Even when it’s something as crazy as running sub-6-minute miles at age 56, over and over again.

After all, what else should she do? She’s running.

Previous post: Review: In The House Upon The Dirt…