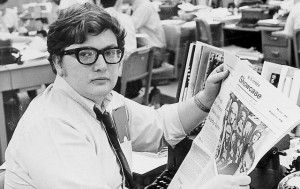 I won’t lie: I’ve spent most of the past decade resenting Roger Ebert. I’d never been a fan of his “thumbs-up, thumbs-down” approach to something as nuanced as film criticism, but having grown up with “Siskel and Ebert” during the 1980s, I at least respected him as a knowledgeable guy.

Until the summer of 2003. It was a review he wrote – the film doesn’t matter, and I don’t even remember what it was. What does matter is that he made a glaring error: he compared the movie he was reviewing to “a work of French Expressionism from the 1930s.”

I had just finished my M.A. in English and cinema studies, and I was eager to put my newfound knowledge of film history and theory to use. I didn’t want to be a film critic, per se, but I did want to write about film — “think” pieces, feature stories, profiles peppered with insight, bridging the gap between academia and the world at large. I wanted to be a “public intellectual.” And, indeed, I did get  work — both before grad school and after — from film magazines to write long articles of which I was very proud.

Still, I was no Roger Ebert. Very few people knew my byline, and I was barely surviving as a writer. A 2,500-word feature would net me $250. Ebert, meanwhile, was at the top of his game — possibly the best-known film writer ever. So when I read that review alluding to “French Expressionism of the 1930s,” I blanched. “How could he be so stupid?” I wondered bitterly. Everyone who knows anything about film history knows that there was no “French Expressionism” in the 1930s — there was German Expressionism in the late teens and early 20s, sure, and French Impressionist cinema towards the late 20s, but no French Expressionism.

Ebert’s editors at the Chicago Sun Times probably did not fact-check his work — why should they? He was Roger Ebert, writ large. But even he made mistakes, and to me — unemployed, ambitious, and holding a shiny new M.A. in film history — Ebert’s success was further proof that life is not fair. I’d never make a mistake like that, I thought with smug self-satisfaction.

The truth is, I would make a mistake like that, and I have. We all do. It’s not an unforgivable sin for a writer to mess up; it’s just part of the writing life. The more words you commit to print, the more likely a few of them will be out of place. It’s all but certain.

Now that Ebert is gone, I find myself thinking about his career, and the name he established for himself in the firmament of so-called public intellectuals, in a very different way. Not only do I forgive that mistake he made way back in 2002, in a short review no longer than a few hundred words, I also regret dismissing him because of it. No writer should lose the faith of a reader merely because he’s human.

But even more than all that, I regret that I didn’t pay more attention to Ebert’s work while he was still alive, and not just because he had a lot to say about film. I realize now that he will never be replaced. The world has changed, and the prospect of becoming a Name Writer in something as subjective as arts criticism has diminished nearly to nil. The field of opinions has grown too crowded — Facebook, Twitter, blogs — for a lone voice to rise above the cacophony  of chatter and establish itself as the One to Listen To.

Say what you will about the democratization of the Internet, and the beauty of a world where everyone has a voice. The fact is, if Roger Ebert were 25 today, no one would know his name. He’d be just another blogger, if he even bothered to write at all.

Next post: Why Roger Ebert was the greatest movie reviewer

Previous post: In the age of information, are books still sacred?