In the age of information, are books still sacred? 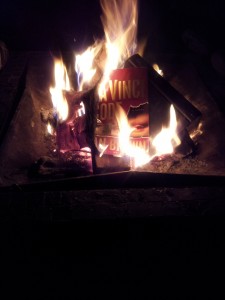 Virtually every high school student in the United States has been proselytized with the idea that book burning is bad.  It’s on the syllabus: Ray Bradbury’s 1953 novel Fahrenheit 451, typically assigned during sophomore or junior year, depicts a dystopian future in which books are burned by firemen working for the State as a means to control thought and suppress dissent. We’re taught that books are synonymous with knowledge, and that knowledge is good. Any effort to censor knowledge should be fought, lest we become a population of mindless drones at the mercy of whomever (or whatever) might lord over us.

But it’s not 1953 anymore. Information takes many more forms now that it did then and “books” no longer need paper to survive. So where does that leave burning those reams of paper sandwiched between two covers and bound together with glue and string? Is it still a crime against thought itself?

Last Saturday night, I was at a bar in Brooklyn with an outdoor area and a large, open fire pit. It was the first open fire I’ve ever seen in New York City, let alone late at night, at a bar full of people drinking booze. Suffice it to say, I understand now why it’s not a more common feature at the local watering holes — by about midnight, people were throwing all kinds of things on the fire that would make a Al Gore scream in distress: six-pack beer carriers, empty cans, even glass.

And then, with a decisive plunk, a hard-cover edition of The Da Vinci Code.

I was sitting next to the fire when Dan Brown’s 2003 mass-market mystery burst into flames. Some people cheered, others didn’t seem to care. And a few of us blanched — how could someone burn a book? we muttered in disbelief, despite how dumb that book might be. The book’s owner, a young man festooned with piercings, replied to the dissent with a quick, “Oh, please — it’s just paper. You can get it on Google Books.”

“It’s the principle,” I said to a friend sitting next to me. “It’s just wrong.”

But in reality, I wasn’t convinced of my own position. Why shouldn’t we burn books, when they’re available everywhere all the time, in print or in pixels, and we already have a surplus of stuff? What mattered in that moment was not having yet another copy of The Da Vinci Code in the world, but keeping the fire going. After all, it was cold.

We spend a lot of time debating the merits of digital versus analog technologies — and I’m often the first to come down in favor of the latter, an admittedly default stance born of nostalgia for my own pre-Internet childhood, when things seemed more “real.” But we don’t often discuss the corollary to the ubiquity of digital formats, which is the increasing obsolescence of their print forebears. In other words, burning a book may be no different than tossing that stack of magazines you’ve got piled under the coffee table.

To those of us who were born before 1980, this still feels like sacrilege. But maybe that’s our problem. As Bob Dylan admonished the older generation way back in 1964: Don’t criticize what you can’t understand. Your sons and your daughters are beyond your command, your old road is rapidly aging. Please get out of the new one if you can’t lend a hand, for the times, they are a-changin’.

Could Dylan himself have ever anticipated his words being used to defend the burning of books? Highly unlikely. The entire practice is anathema to the ethos of the 1960s, which trickled down to my generation. But Dylan’s 1964 audience of young and rebellious men and women attending universities, learning to think for themselves and upending previously held belief systems, are now in their 70s and 80s.

The road has continued to change, rapidly, and sometimes progress can seem like anything but. It may even seem like the exact opposite — a sliding back to a more barbaric time, a devolution towards complacency and a culture that not only shrugs off being controlled by the State, but actually participates in its own intellectual enslavement. Or maybe I’m just over-thinking the whole thing, if that’s even possible.

Previous post: If you’re not getting paid, should you still publish?