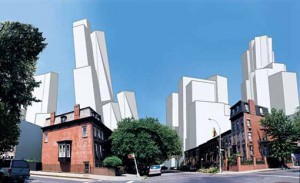 In Hal Ashby’s first film, The Landlord, a young white man (played with smarmy aplomb by Beau Bridges) announces to his very rich family that he’s just bought a brownstone in Park Slope, Brooklyn. The year was 1970, and Bridges was 29. After an awkward pause, his brother asks, “Are you aware that that’s a colored neighborhood?” “Oh, yes, I’m three doors down from Mom’s Chitlin and Rib Joint,” Bridges replies with a smirk.

It’s hard to imagine a Park Slope without its yoga studios and organic markets, but Ashby’s film proves it wasn’t always the urban suburb it is today. Shot on location, on a block that’s now about as nice as they come, it shows a Park Slope on the cusp of total transformation. But in 1970, that wasn’t a foregone conclusion: The brownstone Bridges’ character buys is a rooming house full of black people who don’t pay their rent, who mock the new landlord from the moment he arrives, and most of all, who are determined not to leave.

And they don’t. Instead, by the end of the film it’s Bridges who leaves, voluntarily relinquishing the brownstone to one of its residents. But The Landlord is fiction. Reality isn’t quite so rosy, neat, or just.

Nearly 20 years after The Landlord was released, Spike Lee made Do the Right Thing. Near the beginning of that film, a young white man (a secondary role played by John Savage) in a Boston Celtics shirt gets accosted on his way into a brownstone in Bed-Stuy, where the film takes place. “Who told you to be in my neighborhood?” shouts Buggin’ Out (a frantic young black man played by Giancarlo Esposito). “I own this brownstone,” Savage replies calmly, but visibly afraid. After a lot more shouting, Buggin’ Out yells, “Why don’t you move back to Massachusetts?!” Savage rejoins: “I was born in Brooklyn.”

Do the Right Thing resonated in 1989, and continues to resonate, because it doesn’t offer easy answers. Gentrification cannot be reduced to a simple formula of black vs. white, or even good vs. evil — at least not at the ground level. The middle-income white person who moves into a predominantly lower-income black neighborhood is not necessarily bad, nor is she trying to displace anyone. Rather, she was likely displaced herself, from her once-affordable neighborhood by high-income new arrivals.

Nearly 24 years since Do the Right Thing, a new documentary from the Brooklyn-based director Kelly Anderson takes a fresh look at the complexity of gentrification. In My Brooklyn, Anderson and her producer, Allison Lirish Dean, make the case that it’s not about whites moving into previously black, Latino, or Asian neighborhoods — Anderson herself moved into Fort Greene in the 1980s, when it was a predominantly black neighborhood. Rather, it is a problem of economic development at all costs, a matter of political machinations, power dynamics, and exchanges of big money between parties that may have never set foot in the places their negotiations are affecting. In other words, her film makes the idea that gentrification can be defined by a lone white man buying a brownstone in a black neighborhood seem positively quaint.

My Brooklyn looks at how those machinations have impacted the borough’s downtown over the past 10 years, particularly the neighborhoods surrounding the $5 billion real estate project known collectively as Atlantic Yards.

Like Anderson, I lived close to the site of that project during its initial stages. Throughout the early and mid-2000s, the Atlantic Yards plan galvanized the communities surrounding its site in protest. You couldn’t walk down a street in Fort Greene, Park Slope, Prospect Heights, or Boerum Hill without seeing the dissent literally plastered in people’s windows. “Stop Atlantic Yards!” posters were everywhere, and community action committees were formed to fight the impending project that would raze homes and change many lives for the worse. In short, people were pissed, and they fought Atlantic Yards for years.

And then they stopped. Gradually, resistance turned into passive acceptance, and then into outright jubilation over the arena that would be a centerpiece of the plan. It was a total PR coup.

In September 2012, the Barclays Center opened with a concert by Jay-Z, a Brooklyn-born rapper and the poster boy of Atlantic Yards. Jay-Z grew up in the projects, sold crack as a teenager, and has since become unfathomably rich. Who better to sell the idea that Atlantic Yards is good for the borough? After all, Jay-Z is pure Brooklyn, right? Isn’t he one of the people?

It’s a con. How does a single rags-to-riches tale make the loss of entire communities, the shuttering of hundreds of small businesses, and the general destruction of a wide swath of Brooklyn any less bitter?

As soon as the Barclays Center opened, its PR machine had done its job. Suddenly, people were celebrating a roster of Nets games and concerts by bands from the Rolling Stones to Coldplay, and by then, the “Stop Atlantic Yards!” posters had all but disappeared. You might still see one now and then, in a lone apartment window, but now it just looks pathetic and a little bit delusional, like a faded Gore/Lieberman bumper sticker.

My Brooklyn was finished before Barclays Center opened, and does not spend long on Atlantic Yards. It lingers instead on the Fulton Mall, a stretch of decidedly un-bourgeois shops in downtown Brooklyn just steps away from Atlantic Yards, that many newcomers openly despise. “I think they should just make it go away,” says one man in the film as he shops at a farmer’s market in Fort Greene. Meanwhile, many others who have lived in Brooklyn far longer see the Fulton Mall as a place where they can get the clothes, food, and music they want. It’s an essential part of their Brooklyn.

The themes Anderson explores in the film extend far beyond the mall, or even the borough, to any city that is undergoing a similar transformation. She enlists historians and activists, city planners and politicians, residents of the area (both new and old), and shop owners to present a story that doesn’t end with the Hollywood trope of redemption, or in fisticuffs, but with a sense that something can, in fact, be done.

Not yet a historical document, My Brooklyn is a call to action. It doesn’t offer answers, but it will start a conversation. And in the face of something as powerful as what’s happening in downtown Brooklyn today, that’s about as much as anyone can ask for.

Next post: PO KO MO — the (Swahili) grammar of being