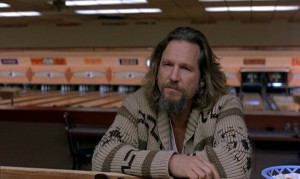 You might think that if comedy met Buddha on the road, they would just continue on their respective journeys. But that’s just, like, your opinion, man.

To wit, the Dude is back — not to wreak unintended havoc all over LA, but to enlighten. Jeff Bridges has just released a book with the Zen master Bernie Glassman, titled (what else?) “The Dude and the Zen Master,” that explores Zen themes in The Big Lebowski through a transcript of conversations the two men had over five days together on a ranch in Montana.

It’s safe to say that a lot of people love that 1998 Coen Brothers film starring Jeff Bridges as a pot-smoking loser in a dumpy part of Los Angeles who is mistaken for another Lebowski, a MacGuffin that sets in motion a litany of hilarious adventures and near-death experiences. It has become a cult classic. Every year, people turn out in hordes for Lebowski Fests nationwide, and many more revisit the film time and again, insisting that they see something new each time. I’ll cop to being one such Lebowski fan.

But it was definitely a sleeper hit. When the film was released almost 15 years ago, it did not fare well at the box office, and many ardent Coen Brothers fans failed to recognize its genius. It seemed stupid, contrived, silly — like the Coens were imitating themselves, a perceived irony for anyone who’d studied their 1992 indictment of Hollywood, Barton Fink, in earnest. That film revolves around a young and serious New York playwright who finds himself plopped down in Hollywood with orders to deliver that “Barton Fink” feeling, and if he doesn’t like it, no problem. “There are a million writers out there who can give me that Barton Fink feeling!” a producer shouts at the young man.

With Lebowski, it seemed that the Coens were simply delivering that “Coen Brothers” feeling.

But it really is a work of genius, and the genius is in the details. To watch The Big Lebowski is to study it. Certain lines have become catch-phrases, like “The Dude abides” and “He’s a good doctor… And thorough.” Fans love to quote and re-quote the film, and it seems to never get old.

But apparently a lot of this was unintentional. Bridges and Glassman talk about the Zen philosophies inherent in a script that the Coen Brothers never meant to be philosophical at all, let alone Zen. And maybe that’s why it works. Had they tried to make a movie about Zen themes featuring a pedophile bowler, a band of leather-clad nihilists, and an unhinged Vietnam War vet, I highly doubt they’d have made The Big Lebowski. They’d have made something truly stupid.

In any case, it’ll be interesting to see how fans receive “The Dude and the Zen Master.” Will it become essential reading for any acolyte of The Dude, or will it be simply ignored? I suspect the latter, if only because time spent reading the book will only take time away from watching the film. And the film, of course, is where the light is.