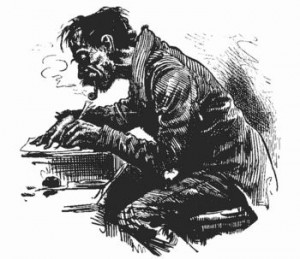 Writing ranks pretty low on the list of guaranteed paths to success — down there with sculpting and growing exotic plants. No one goes into it because it’s a sure thing.

And I’m not just talking about being a novelist or writing for the New Yorker. Writing, like acting, can take many forms: you can be a copywriter, a journalist, and now, in this day and age, a social media “expert.” I always thought it was funny that within a year of “social media” becoming commonplace, there were so-called “experts” in our midst, ready to wrangle the Twitterverse and the Blogosphere on behalf of one concern or another. And that companies bought into the idea that these kids (because let’s face it, they weren’t 40) really were experts.

But it’s getting harder to make a living at it. Really hard. And I find myself thinking back on 15 years in a field that has seen some very glossy magazines come and go, the rise of blogs, the advent of “content farms,” and a personal career that includes copywriting, journalism, ghostwriting, teaching, and now, at age 37, social media.

In the immortal words of David Byrne: You may ask yourself, well, how did I get here?

Yes, some writers have the luxury to only write about big topics for widely read magazines. But most of us have to take work where we can get it, and if my 15 years in the business have taught me anything, it’s that great things can come from the most unexpected places. I once dropped what I was doing to say yes to ghostwriting a book. Another time I took a chance with a very uncertain opportunity and found myself transformed, almost overnight, from a stalwart of print journalism into a blogger. I have never said no to a project.

But I also spent years living below the poverty line, and now, as I creep near 40, I find myself maintaining a job that has nothing to do with writing strictly for the health insurance. It’s the bass in my professional life, the pulsing, rhythmic foundation upon which everything else can flourish. And this has made me averse to risk, perhaps even a little bit complacent.

I know a critic who left a full-time job to devote himself fully to writing about books, and I admire him for it. But there seems to be an inverse relationship between his productivity and his finances. I can relate to this. The most active periods of my professional life have also, ironically, been my most insecure. If most writers I know were to divide the amount they made in a month by the hours they worked, the wage would likely be less than what you’d earn at Starbucks. No joke.

And yet, you can’t put a price tag on opportunity. In the same song quoted above, David Byrne asks, rhetorically, Where does that highway lead to?

No one knows. But we do know that it comes but once in a lifetime.