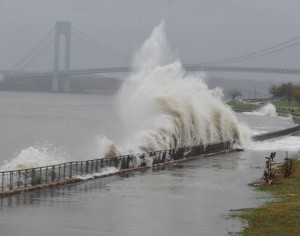 I am a runner. I haven’t taken more than two weeks off from the sport since my father gave me my first pair of running shoes on my 23rd birthday, 14 years ago. Even when I was hobbled by a pinched nerve in my leg, I stupidly insisted on running before the nerve unpinched itself, prolonging my recovery each time.

And I love to race. I set my sights on a goal race — anything from a 5K to a marathon — sometimes months in advance. And since this summer, my focus has been squarely on the New York City Marathon, which would be my 20th (and likely my final) attempt at that distance. I’ve finished each of the other 19, to varying degrees of success, and I wanted to go out on an even number, and in my hometown’s marquee event.

But then Hurricane Sandy ripped my hometown apart. People are stranded; many more are without food, electricity, or running water; and at least 41 people have died. The celebratory atmosphere of the New York City Marathon has been utterly replaced with a heated debate over whether to hold the marathon at all.

The city’s mayor, Michael Bloomberg, insists that New York needs to show the world that it will rebound from this natural disaster, just as it always does. He says the economic boost will help struggling businesses, and that now more than ever, we need the projected $300+ million that the marathon generates for New York.

But runners are being called selfish for wanting to run the race when so many in the five boroughs have lost their homes, or worse. The race’s starting area, in Staten Island, is within shouting distance of the place where a 39-year-old mother lost her two children, when they were wrested from her arms by a tidal current as she tried to escape the hurricane in her car. Not far away, an elderly couple was also found dead.

One counter-argument is that when tragedy strikes, mourning only goes so far. We also need to show that we are strong, and that life goes on. There are still thousands of people here who are alive, healthy, and excited to realize their dream of running through all five boroughs of this giant, inspiring city. They should not be vilified for running this race, for celebrating the lives they have, in the city they love — or perhaps are seeing for the first time.

Another is that if the race will go on, one might as well run. But some of the people making this argument feel great ambivalence about running themselves. They have even admitted that while they plan to toe the line on Sunday, they wish that the city would save them the ethical dilemma and just cancel the damn marathon.

This is because we all know that there are precious resources being devoted to this race that could be used to help those in need: Generators for heat, food, water, police, and medical personnel. How can we strive for personal glory when doing so prevents someone else from eating, or having a warm room in which to get some much-needed rest?

Because it’s not so simple. The resources that have been allocated for the marathon — food and water, especially — would not necessarily go to anyone who needs food and water if the marathon were canceled. And if one person decides not to run, it’s not like the food they would have gotten will instead be sent to a shelter.

But it could be, right? That’s the opposing point some are making, leading the debate once again around the circle, and runners like me deeper into ambivalence.

What would an ethicist advise?