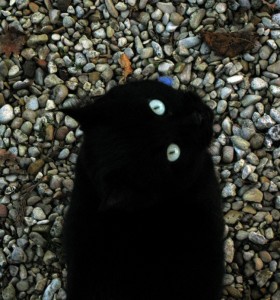 It was 1999 and I was spending that autumn at a small art school for American students in a tiny French village. They didn’t celebrate Halloween there. Non costumes. Non pumpkins. Non bons-bons.

Like good Americans, we decided to change all that. We dragged pumpkins into the local school and gave the children big sharp knives to make jack-eau-lanterns. Arrangements were made with the parents that Trick ou Treating would commence at dark.

I heard them before I could see them, coming up the steep hill to my house. I gripped my bowl of candy excitedly until they turned the corner. There they were, yes, the entire village was Trick ou Treating, in costume, as a pack. To make it even more surreal, they were followed through the narrow stone street by an accordion player.

They banged on my door like it was the Inquisition. When I opened it with a gleeful “Trick ou Treat!” sixty pairs of hands made a grab for the candy. I attempted to fend them off, but they outnumbered me. I tried to explain proper Halloween etiquette as I placed candy in the grabby hands as fast as I could but they just kept coming at me until I lost it. I started throwing candy at the crowd shrieking, “You’re doing it wrong! You’re doing it wrong!” They left me there, candyless, exhausted, and spent. But the accordion player stayed behind – to mock me with his song.

Who’d have thought it would be the French that would give me the scariest Halloween I’ve ever had?