by Amanda Leigh Lichtenstein on October 12, 2012

Just when I think that Zanzibar and I are at complete odds with each other, I have a morning like this one, where a beloved poet walks into my office and speaks to me in poetry. Never mind that he is approximately 80 years-old and speaks a kind of Swahili that is so deep and so heavy that some of his beautiful or funny ideas seem to take decades to arrive in my smoke-filled brain.

And here he was today in my office, drenched in mid-morning sunlight, wearing a white-knitted kofia and well-worn kanzu, sipping on chai with three heaping teaspoons of sugar and munching on a greasy chapatti and sambusa. At his feet was his signature basket, filled to the brim with his materials – poetry books, an introduction to his yet-published autobiography, and a crumpled fist-full of handwritten notes and ideas jotted down for future poems.

I know he is adored by many, but somehow I want (or need) to believe that he loves me more, and that it’s because when we sit together in this air-conditioned office, time stands still like it does for the best lovers anywhere, and all that matters is this electric exchange of words and images between us.

Born in 1933 on the small island of Tumbatu, Haji Gora Haji was trained, like most young men, to know intimately the sea and the Holy Quran. Haji Gora says he remembers the first song he wrote in 1955 as a member of a song and dance group competing for honor in Tumbatu. This competition was followed by many others around the islands in subsequent years, and in each Haji composed songs of which few were written down.

Haji Gora Haji went on to become one of the most beloved and well-respected poets in Zanzibar, primarily as an orator of traditionally-sung Swahili poetry that follows a very strict rhyme scheme and is influenced primarily by traditional Arabic religious verses written to express spiritual exultation. His works have been widely read in Tanzanian classrooms and occasionally his poems and stories appear on national exams. He’s published books such as KIMBUNGA (1995) and SIRI YA GING’INGI (2009) as well as presented at a variety of major poetry festivals like Medellin (Columbia) and Rotterdam (Holland) and newer ones like the locally produced Jahazi Literary and Jazz Festival.

Some say that Haji Gora Haji does not know how to read or write, but this is not exactly true. He was not able to complete a basic education due to a lack of funds, but he taught himself to read and write and worked tirelessly in his adult life with editors and translators to bring his ideas and images to the world. His gift is the oral tradition, but he takes much pleasure in the written word.  When I gave Haji an anthology of Swahili verse to read, he flipped it open and began reading immediately out loud the poems he found most interesting, making many comments about the structure and form of these poems as compared with his own.

Haji mentioned today that he still hadn’t received many royalties for the books he’d written or produced even though they play a major curricular role in Tanzanian education. To date he says he’s only received approximately two hundred U.S. dollars for what seems like a life time of contributions. Though it bothers him, he also shrugged his shoulders and admitted that for most artists and poets in the world, their value is yet unknown until they die. He seemed to find some poetic irony in this dilemma, and swore he’d keep composing new works despite the hypocrisy of being a well-loved poet without the wealth to prove it.

What he most wanted to show me this morning was a catalogue of forty poets’ biographies and sample works  — of which he is one featured. This catalogue was produced in 1999 as part of Rotterdam’s 30th Poetry International Festival, where Haji Gora presented his poetry and met with the 39 other poets from around the world, his favorites being Galsan Tschinag from Mongolia, who wrote:

When you leave me

On the North slope of life

Exposed to time and dust

I will slowly bury

Myself in the ground

We sift slowly through the pages of this much-loved catalogue, marveling the various portraits of poets framed in the last year of the 20th century. There’s Lorna Goodison, he says, she’s from Jamaica. And there’s Elly de Waard, the poet pictured with his dog, which Haji thinks is so funny.

When we reach page forty, Haji speaks of himself in third person, pointing to his portrait and saying “This is Haji Gora.” I lean in to get a closer look. There he is, thirteen years earlier at least, his head slightly tilted, his face smooth and younger, his mouth full, his mustache  well-groomed, his cheeks full. Featured is one of Haji’s most famous poems, “The Hurricane,” which we read out loud together. Every line I attempt to read is finished quickly by Haji, who knows this and many other poems by heart.

Not only for this person nor for that        it was chaos

The frog dried up in the river      the water stopped

The shore became fire  the waves were alight

There’s an ancient woman          she captured the humans

She performs miracles   she changes into different colors

Was this Haji Gora’s signature apocalypse poem? Was this a message of hope —  that even in chaos, there are still those things that are spared? The mansions were flung, but the little huts survived. The timeless baobabs were uprooted, but the bendable palms remained planted firmly in the earth. The hearts were troubled, yes, but the ancient woman still performs miracles. There are still miracles.

Haji was not about to reveal the secrets of his poem that day.

But three weeks later, in a presentation Mzee Haji gave to our students, it was revealed that this poem was about the brutality of the revolution in Zanzibar in 1964. Those mansions flung were the houses of rich Arabs and Indians. References to the Afro-Shiraz Party and the Tanganyikan Association for National Unity (TANU) are cloaked in metaphors.  The poem, written nearly 20 years after the revolution, (which is arguably more like a civil war or coup) remembers this pivotal time in Zanzibar’s history. Life as Zanzibar knew it had been uprooted and turned upside down, and nothing would ever be the same. What follows is nearly sixty years of unrequited political resentment, broiling beneath the surface.

Our morning conversation didn’t touch the revolution though. It rambled on as students came into and out of the office, meeting briefly with Haji Gora and attempting to follow his ribbon of ideas spoken in playful, complicated Swahili. 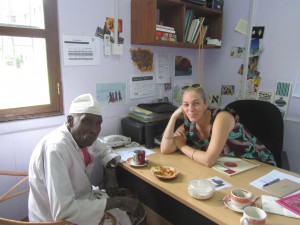 Haji brought out a worn photo album full of pictures of himself as a younger man, one with his wife when she was also younger and not so stricken by polio. Pictures of Haji in a boat on the rivers of Amsterdam, images of him while shaking hands robustly with other well-known poets from Mombasa, Tanga, Nairobi, and other parts of the world. A portrait of Haji near a crumbling wall in his nascent island of Tumbatu. Haji with groovy German students in 1985. Haji delivering a presentation to a crowded room of schoolchildren on the mainland. One of the last images features Haji with a woman named Natalie, an American who supposedly teaches literature and creative writing at an unnamed university. Haji asked me if I know Natalie, this woman smiling brightly, cloaked in hijab, wide-eyed, clearly in love with this moment in her life. No, I didn’t know Natalie.

Here was Haji Gora’s life, or at least some of it, all bound up in images he carries around in this tattered album. What I loved most was noticing that tucked away in this album of life photos was an image of the Princess Salme, a woman of folkloric proportions here in Zanzibar, who was the child of Sultan Seyyid of Oman, born in the early 1800’s. She scandalously taught herself to read and write and later fell in love with a German business man who swept her away to Germany. The fierce (wounded) Sultan Seyyid banished her forever from returning to claim her rightful heir — so she stayed in Germany, became a cultural critic of sorts, and wrote what is deemed the first autobiography written by an East African woman.

Haji Gora apparently has a soft spot in his heart for Salme, or why else would he carry her image among so many others he adores? I’m not jealous. I’m not.

Turning back again to the poetry catalogue, Haji flipped to a page featuring David Dabydeen, a poet from Guyana, and asked if I had ever been to Guyana myself. I told him I’d never made it there, but I’d been to Morocco, Egypt, Ethiopia, Mexico, and India, among other places. India?! He exclaimed. You’ve been to India? He said, I want to go to India before I die.

I didn’t want to speak the words I was thinking – that he might not have much time! Well, let’s go, I said jokingly, but not so —  I suddenly started imagining Haji Gora and I travelling to India together, attending poetry conferences, reading out-loud Indian poets like Tagore while riding the trains together on our way to meetings with other Indian writers and poets.  It’s possible, right? There are miracles?

With a twinkle in his eye, he said he was especially drawn to Bollywood actors and would definitely want to make it Mumbai. When he said that I started thinking about how we could get our hands on some pani puri (Mumbai street bites) on our way to and from the many bookstores in the sprawling city. I realized how crazy this was, the idea of a trip to India with Haji Gora, but maybe not any more outlandish than the idea that this girl from suburban Skokie might one day be directing a Swahili language center in Zanzibar and talking all morning with the esteemed Haji Gora from Tumbatu. So, why not plan a trip to India together?