Where should a writer live? 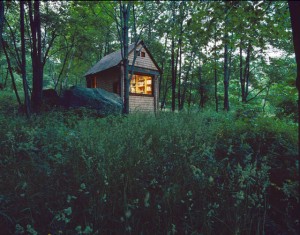 Years ago, I saw Tom Waits in concert. Between two songs, he said something that’s stuck with me ever since: “It’s not that the world is overpopulated,” he said. “It’s just that everyone wants to live in the same places.”

I was living in Minneapolis at the time, having just graduated from college and plotting my next move. One day, I actually took out a map of the United States and debated between the tight network of roads and Interstates that define the East Coast, all twisting around one another like the string inside a golf ball, and the wide-open spaces of the West, where you could see, on the map, just how desolate and remote life could be there. They both held equal appeal, and I was torn. When I chose to move east, it was for the sole reason that I landed a huge, furnished, and very inexpensive co-op apartment in Manhattan without even trying.

But I’ve never given up my desire to live someplace where at night all you hear is crickets, and where you can drive for miles on winding mountain roads without seeing another soul. It will always be the path I didn’t choose, the one where I like to imagine a parallel life unfolding right now, where I live in a small house surrounded by trees and a stream out back.

In the early 2000s, Harper’s ran an article by a writer based in Vermont who had lived in New York City prior to moving north. The focus of his piece was noise, and he concluded that noise is detrimental to thought. He even found a study that claimed a direct correlation between IQ and noise tolerance: the lower your IQ, the higher your tolerance for loudness. I thought of my surroundings on Manhattan’s Lower East Side, which were always a cacophony of salsa music, Chinese fruit and fish vendors hawking their products, and car horns. I coveted the quiet he described.

But I never escaped, like he did. I’ve moved around since then, to Chicago and back, but I’ve never left the city.

I write this the day after returning from a short getaway to the Hudson River Valley, in Upstate New York, where I had two days of precisely the lifestyle I fantasize about when New York’s got me down. And I’m glad to be back in the city, where I feel secure, where I know how to get what I need when I need it.

Then I remember a theory from Louis Malle’s film My Dinner With Andre, shared by the title character, Andre Gregory: He suggests that New York is not just a prison, but a perfect kind of prison. Its inmates are also its creators. They take pride in their prison because they’ve created it, and will therefore never leave.

Obviously, people do leave, including many writers who spend decades here only to escape to quieter, woodsier points north, south, east, and west. It’s a bold move, and one has to be ready. The question plaguing me is, how do you know it’s time?

Next post: Philip Roth has a new biographer, and it’s not an alter-ego