The tarantula and me 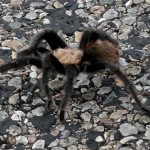 I was on my way home from the art fair when I saw the two tarantulas. My husband and I recently moved to a small town in north Texas so I could take a job as a Visiting Assistant Professor at a small liberal arts college. My previous experience with Texas was limited to one trip to the Rio Grande valley years ago to visit one of my closest friends who had moved there to teach for Teach for America. From her backyard, both the river and Mexico were plainly visible. An orange tree bore succulent fruit right outside her front door.

North Texas was like a different state entirely. Men wore cowboy hats and pressed denim un-ironically. I’d lived in the Florida panhandle for five years, but the north Texas drawl stuck in my ear like the thick honey my husband bought at the farmer’s market.

My husband had taken a trip to Maine to visit friends, while I started the fall semester, so on a Saturday, alone in our newly rented house, I decided to walk two miles to the art fair held outside the municipal building. It was a cool day for Texas in September—rains had lowered the temperature twenty degrees the previous day—so I wore a pair of jeans and flip-flops. I took a direct route walking to the art fair, one that went past the tidy campus where I worked. On the way home, I decided to walk on a different road, to see a different part of the town. A few blocks in, the sidewalk disappeared. The road crossed set upon set of train tracks, and several abandoned warehouses and factories. Eventually, the sidewalk picked back up, and, when it did, there, in the middle of cracked cement, was a tarantula the size of my hand.

I’ve never seen a tarantula in the wild before. I’d seen a few in terrariums at nature preserves and zoos. Most of my knowledge of tarantulas dated back to the movie Home Alone, starring Macauly Culkin, which was popular when I was a child. In the movie, Culkin gets accidentally left alone in his family’s Chicago manse as his parents, aunts, uncles and cousins jet off to France for the Christmas holiday and forget him in the hustle and confusion of a morning punctuated by faulty alarm clocks and a mad dash through O’Hare airport to the tune of “Run, Run Rudolph.” Culkin’s character is an ingenious child, however, and he outsmarts two burglars, come to raid his parents’ loot, with a series of physical gags, one of which involves his brother’s pet tarantula. I liked to think, as a child, that, were I left alone, I too could outsmart Joe Pesci and the tall guy who played the other criminal. Nobody would have wanted to rob my house as a child (a modest 900 square foot home, constantly being renovated, in a small town in Wisconsin), but I also liked to fantasize that I might, one day, live in a sweeping three-story house in a swank, north side Chicago suburb.

The first tarantula was alarming. Adrenaline flushed through me. My hands grew cold and clammy. My mouth dried out. The tarantula turned and started walking towards me. I stepped onto the road and gave it a wide berth.

I saw the second tarantula a few blocks away. It looked nearly identical to the first, with thick black legs, and a tan abdomen that appeared to hover just above the ground, almost too heavy for the spider to lug around. This tarantula was walking in the grass that separated the sidewalk from the road. Something, not me, startled it, and it drew in its legs and hid beneath a fallen leaf. Its camouflage was so good, that had I not just seen it crawling around, I wouldn’t have spotted it hiding there.

When I got home I called my husband in Maine. He lived in Arizona when he was a child, and, I think because of that, doesn’t have the natural fear of giant spiders that most humans possess. “Don’t look on the Internet,” he warned me when I refused to take his word that the spiders weren’t harmful, “it’ll only freak you out.”

The Internet is the first place most people want to go when they’re wondering whether the giant arachnids they’ve just seen roaming the streets are going to come for them in their sleep. Like Bluebeard’s wife, I ignored my husband’s warning.

It turns out he was right. Most of the websites I visited compared a tarantula bite to a bee sting—not pleasant, but not life threatening. Tarantulas are mostly nocturnal; it’s rare to see them wandering in the day. A wandering tarantula may have been washed out of its nest by heavy rains, like the ones that had visited north Texas the day before. Or it might be looking for a mate. A male tarantula will exhaust itself searching for a female. As I fixed dinner for myself alone that night, I thought about my husband, miles and miles away on the coast of Maine. I hoped that the two tarantulas I saw found each other.

I also vowed never to wear a pair of flip-flops on a walk in Texas again.

Previous post: Philip Roth has a new biographer, and it’s not an alter-ego