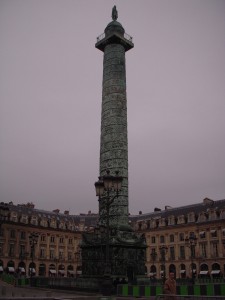 I just went to my first-ever football game: my friend Scout’s high school students getting whupped by a fancy private school with cheerleading boxes. Look at them, we kept saying as the score hit the mid-thirties to zero, they have cheerleading boxes.

I felt, before I went, that I kind of knew what football was about. There were tackles and fumbles and touchdowns and quarterbacks and they wear the weird outfits that make them look like anthropods. This was the sport my dad watched once a year in the basement by himself while eating a couple of gallons of popcorn. Yep, football. Hut!

Turns out, there was popcorn at this game, too. And there were fumbles and touchdowns (by the other team at least) — but I couldn’t actually tell that by looking. Mostly it was a big pile of boys and a man in a stripy shirt throwing this little yellow cloth on the ground. There were also the two JV players practicing a pass over and over on the sidelines, crouching with the little one behind the big one, like a pug trying to hump a newfie. There were the cheerleaders at half time joining up with the enemy cheerleaders to dance around singing “Riding my Pony,” and “Gigalo,” and pretending to all like each other. Jump north, jump south, introduce yourself! What the heck, by the way? Football was at least as weird as I thought it was.

Also, I didn’t actually know what a fumble was. I just knew that it was. It’s the same with French History. I had heard of the Revolution, King Louis, Napoleon, the Commune, the French Resistance, blah, blah, blah. The words were as familiar as runningback and end zone. And as half-understood. Then, while I was in Paris for a month this summer, I read a fat history book called The Seven Ages of Paris. It had a hot air balloon on the cover, because they used hot air balloons to send messages out during one of the sieges. Messages came in by pigeon. These are the things I never knew.

Here are some more: King Henri IV, fondly called the Gay Blade, was a Protestant and sieged Catholic Paris to convince them that they should respect his right to the throne despite his unpopular religion. When, after many months, that didn’t seem to be working, he converted. Then the city he’d been sieging cheered him in and he was wildly popular both with the ladies and the citizens at large until a mad priest jumped his carriage and stabbed him to death. They tortured the priest and tore him apart with horses. Then the mob descended on the priest and someone even ate some of him. This is Western Civilization, not as long ago as you might guess.

Napoleon was after the Revolution. I knew that, of course, but I never thought about how quickly the French democracy turned into a dictatorship. Also, some people think of Napoleon with some real respect. I guess there was more to him than his red pants and his namesake complex.

Then there are the sieges. Paris has had a whole lot of sieges. And a whole lot of times when Parisians killed each other, or when other people killed them, right up through World War Two. Starvation in Paris: not just an ancient thing. And Bismarck: that’s a name people toss around, at least in the kind of historical novels I read as a kid. Sure, sure, I would have said. Bismarck. But I had no idea who I was talking about. I picture the puffy oven pancake. Turns out, he was the guy who united Germany, dominated Austria and France, and created a long period of peace before World War One, but also set up some of the psychology that made the Allies so punitive with the Germans after the war. That’s no pancake.

There is much more to French history, though kings and sieges and unrest seem like common themes. Likewise, I am informed there is more to football than people tangling up and falling down, which may or may not include something called a fumble. But that, at least, is how American football is like French history.

Also, they both have lots of men in tight pants.

Next post: Let’s ask again: What (and why) is creative non-fiction?

Previous post: Is the Atlantic making itself go viral?