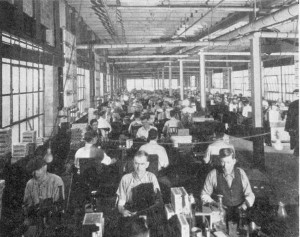 Ryan Smith has a degree in journalism and more than a dozen years’ experience writing for bona fide newspapers. That didn’t spare him his job, though, and like many of us with resumes replete with publications, advanced degrees, and the willingness to work for very little money, he recently found himself scrounging for editorial work.

And like many in his situation, he found that work with one of the New Millennium’s content farms, a misnomer if ever there was one. They should be called “content factories,” because what they produce is not grown, but assembled, and the people who assemble it are sometimes as removed from one another as the people who make the various pieces of a Ford Focus.

Smith lives in Chicago, and the company he worked for until very recently is Journatic, which “produces” content for newspapers around the country — no article, or topic, is too small. But who produces it? Filipinos, to start. They compile research and write it up, in broken English, and then send the stuff — what else can you call it? — to the editors at Journatic, who polish it and make it look like journalism. At times they attach a fake byline — a ghost — to the article so it appears to have been written by an actual “someone.”

What would Karl Marx say? In modern society, workers are increasingly reduced to minor roles within the great industrial complex, producing only their part of a machine, or even, a piece of processed food. The guy who makes the paste that will become the macaroni has no contact with the lady who mixes the chemicals that will become the powder that will become your cheese sauce, and neither of them will ever meet the people who print the boxes, or those who will assemble them, and on and on down the line.

Smith quit his gig with Journatic kind of like Greg Smith left Goldman Sachs last winter: by speaking out against the company in the national media. Greg Smith wrote an Op/Ed for the New York Times; Ryan Smith went on This American Life. But whereas Greg Smith had earned enough that he could quit his job without immediate peril, Ryan Smith was raking in around $4 an hour at Journatic.

The wage was not an hourly, but rather, as is usually the case in journalism, the agreed-upon rate for a given article. A 400-word piece for the Houston Chronicle might fetch him $12, and because he cared about his work, he’d spend a few hours on it. That’s a good way to go broke.

It’s also a good way to ensure the demise of journalism. As the NPR segment pointed out, you can’t expect writers who are making almost nothing as it is to go the extra mile and actually report on a news story. They will call one, maybe two sources and call it a day.  Journalism, in short, is becoming garbage.

Newspapers are bleeding, or worse, dying. Meanwhile, Journatic is thriving, and even hiring.

Ryan Smith’s public denouncement of Journatic may bring awareness to the problem, but it won’t stem the destruction. Instead, I fear it will only shine a light on what journalism used to be, and will never be again. His appearance on NPR has already gotten a lot of attention from interested parties — that is, people who care about journalism — but all that attention seems come with a subtext, a resigned lament about the old days of quality journalism: “Goodbye to all that.”

Next post: Searching, in vain, for an authentic experience