We were just 18 years old and Mimi was the first of our friends to slip to the other side – into adulthood. Mimi was getting married and she had asked me to be a bridesmaid. My lone task would be a simple one, and to which I was well suited, the bachelorette party.

Eight girls, a keg of beer, my folks out of town, and a hot tub under the stars on a warm August night. This was my plan.

I was working as a waitress that summer. One day, the University of Oregon State basketball team, the Oregon Ducks, came into the restaurant and were seated in my section. Banter ensued.

You might think that college basketball players would be smooth-talking, experienced Romeos. But not the Ducks. They were cute boys, tall, of course, awkward, and excited to be away from home.

They said they were free the next evening and asked if I would have dinner with them? I had never dated a basketball team before, and I do like a tall man, but then I remembered that I couldn’t possibly. I would be hosting a bachelorette party for my friend Mimi.

The Ducks thought this was fine news. But I wasn’t so sure. Unless? “You can come to the party,” I said, “but you would have to be the entertainment.” I ventured a little further, “With a striptease.”

My suggestion ruffled them. They tried to negotiate with me, but I had to be firm. “Are the Ducks chicken?” It turns out they were. But I was able to talk a few of the more daring Ducks into it, as their teammates egged them on. So we hatched a plan.

The next night found the girls loud and sloppy. An old Chippendales video that I had found in a thrift store played in the background. As professional male dancers in g-strings grinded their hips to the music, we drank beer and pretended to be cool. We were so young then. I was still living with my parents. We tried hard to act grown-up, pretending that it was all so natural, that we weren’t terrified of Mimi’s impending adulthood and its significance regarding our own.

With all eyes on the tv, no one noticed when there was a quiet knock at the door. The Ducks were here. I dipped outside. The boys were giggling nervously. “Bras and panties!” they directed. “Bring us bras and panties!”

Well, I certainly wasn’t going to give the Ducks my bras and panties, so I raided to my mother’s bureau, throwing Mom’s bras over one shoulder and her panties on the other.

At the record-player, I cued an album to the song “Touch Me” by the Doors. Then I returned outside and lined up the Ducks, arming them with my mother’s undergarments.

The girls were still glued to the Chippendale dancers on the screen when I switched the tv off and cut the lights. I ran to the stereo and dropped the needle. But, in the dark, I missed. Jim Morrison creepily chanted, “I am the Lizard King. I can do anything.”

Someone whimpered in fear.

After several scary moments in the dark, the music started up, I switched the lights on and off maniacally as Jim Morrison screamed out:

That was the cue!

Like a shot, the Ducks flew into the house, creating a spectacle with my mother’s intimates. They threw them about the room in what I imagined was a sort a diversion until they could build up their courage.

But the girls responded by screaming as if they’d just seen Elvis. In the frenzy of bras and panties being tossed about, they began stripping down to their own. I hadn’t seen that one coming, nor apparently had the boys, who were delighted. Thus emboldened, they began to disrobe down to their boxers and briefs.

The scene became utter chaos as teen-agers in their underpants danced around my parent’s living room. We were wild with the release of our combined fears, breathless anxieties, and roaring hormones. It was the last dance, the last time we would laugh so hard, fly so high, the last time we be so naked and so free. 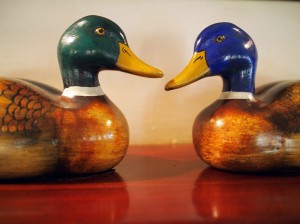 Breathless, we all spun our way outside where we crowded into the hot tub. We took to that water like, well, you know.

We drank beer, giggled, and shared stories under the stars. Until the first yawn broke our spell, and we all knew it was time to sneak the boys back into their hotel.

They say that girls just wanna have fun. And that women, they run with the wolves. But that night, we were balanced precariously between both worlds. We danced with the Oregon Ducks.

The next day, the girls and I donned our baby blue bridesmaid dresses and clutched bouquets of baby’s breath. We gripped the arms of men dressed as penguins as we solemnly marched Mimi toward her hopes, toward our own. When the time came to turn away from that altar, veils lifted, we found the future was now our stage. And as we floated toward it, we became as swans.

Previous post: Dylan/Pynchon, and the choice to go electric