Dylan/Pynchon, and the choice to go electric 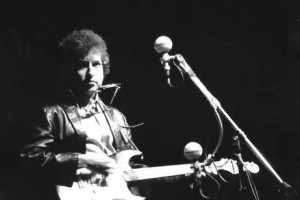 Remember the 1965 Newport Folk Festival, when Bob Dylan blew the eardrums of his die-hard fans by plugging in his electric guitar? Of course not; you weren’t alive — or if you were, you probably weren’t listening to Bob Dylan (yet).

In that now-legendary move, Dylan began a decades-long career defined by chronic self-reinvention. And regardless of how many people he pissed off in 1965, his transition to electric has been vindicated through hits like Positively 4th Street and, of course, Like a Rolling Stone, a song he famously kicked off in London the following year by instructing his band to “Play it fucking loud.” Those songs are are now quintessential Dylan.

It’s a specious analogy, perhaps, but consider Dylan in light of this piece of news from the world of Big Publishing: Last week, Thomas Pynchon relented to pressure from publishers, fans, and doubtless many others when he agreed to let his books be re-published electronically. Some speculate that he wants to gain a wider audience, and maintain a readership among younger people. Others, no doubt, are saying that the 75-year-old reclusive author of Gravity’s Rainbow, The Crying of Lot 49, and Mason & Dixon, among other postmodern classics (oxymoron?), is just too old and tired to fight it anymore. Whatever his reasons, Pynchon’s move to electric is a very different situation from Dylan’s nearly 50 years ago.

One was an act of rebellion, of asserting an artistic prerogative at the potential cost of a career; the latter is an attempt to stay in the game, an almost desperate plea for attention in an increasingly noisy world.

Maybe it will work: Michiko Kakutani, one of the New York Times‘ primary book critics, took the opportunity to revisit Pynchon’s 1997 800-page novel Mason & Dixon and wrote an appealing review of it this week. And given how long it can take to parse a Pynchon novel — even the 183-page Crying of Lot 49 has been the subject of PhD dissertations and graduate seminars in English programs — perhaps more people will endeavor to try now that they can slip his books into their pants’ pockets.

Personally, I’m more interested in how going electric, now, means joining the club. But just as I can’t imagine a world without Blood on the Tracks, and wouldn’t want to, maybe the world needs electronic Pynchon. It just might not know it yet.

Previous post: Writer’s block? There’s an app for that.