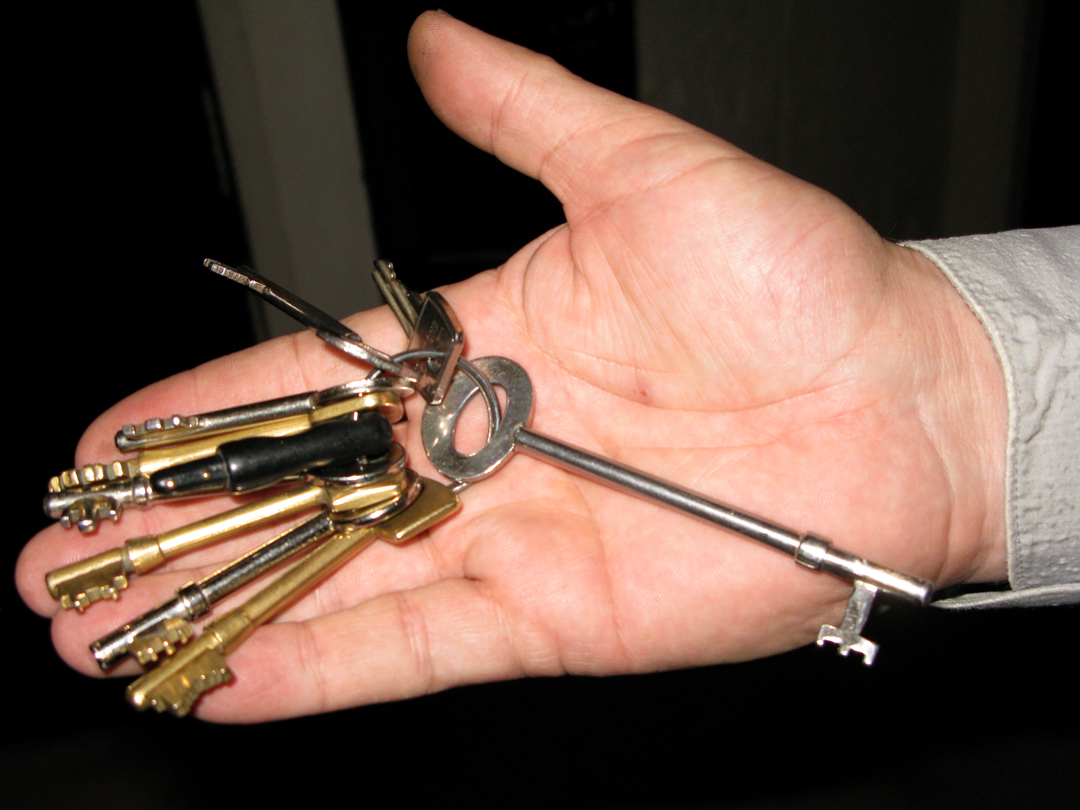 Oranges and lemons,
Say the bells of St. Clement’s

You owe me five farthings,
Say the bells of St. Martin’s

When will you pay me?
Say the bells of Old Bailey.

When I grow rich,
Say the bells of Shoreditch.

When will that be?
Say the bells of Stepney

I do not know,
Says the great bell of Bow

Whoever imagined that this charming, yet somewhat macabre, nursery rhyme would someday find itself the center of a religious controversy? For though London’s St. Clement Danes claims to be the noted church of this well-known song, the same city’s St. Clement Eastcheap also stubbornly advertises it as their own.

“However,” notes the verger of St. Clement Danes rather smugly, “We got in first.” He is referring to the fact that in 1920, the church’s Vicar put the famous carol in the belltower so that St. Clement Danes would forever be known as “The Oranges and Lemons” church. “Though, it could literally be either church,” he admits under my intense questioning. “I’d like to think it is here because I work here.” Cleverly cementing the association in the minds of future generations, it is tradition for the students of St Clement Danes Primary School to be given an orange and a lemon after each year’s annual service.
The bells play the tune 3 or 4 times a day, which would drive me nuts, but apparently the church’s staff has grown accustomed, if not downright fond, of it and takes great pride in their association with the carol. 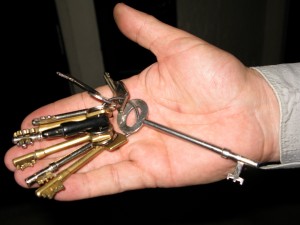 The Keys of St Clement Danes by Crista Cloutier

My initial experience with the bells of St. Clement Danes was as I first approached the building one rainy Sunday morning to attend Eucharist. The sheer force of the bells nearly knocked me off my feet. The word “peal” took on an entirely new meaning as I almost had to peel myself off of the sidewalk. The hearty hellos and cheery good mornings that greeted me as I entered the building led me to erroneously expect that this would be a boisterous congregation. Instead, I was disappointed to find a brave few scattered throughout the quiet pews. There were not many young people in attendance and no children in sight. But the church itself was gorgeous, with an immaculate interior that allowed for plenty of light. In fact, though it was a cold dreary day one quickly forgot that whilst bathing in the warm glow found inside of St. Clement Danes.

The Vicar was jovial and heartfelt. The day’s sermon was on love, specifically on Jesus’ command to love. The Pastor noted at the beginning of his talk that we’ve all heard this sermon before and might be tempted to indulge in a bored yawn. He was correct.

The congregation listened politely. We duly stood and sat as directed by our programs, repeated our line “Lord Hear Our Prayer” when prompted and recited the “Our Father” in a collective voice that was both tepid and uncertain. Communion was taken on our knees, which was a new experience for me as I have always stood. First came the wafer and then the wine, which was, I must admit, delicious. A dry amber that sparkled on the tongue in a way that was completely unexpected. Of course, most American churches now eschew the wine in favor of fruit juice so I may be easily impressed. We all drank out of the same chalice. Swine flu be damned.

Though the message of St. Clement Danes was steeped in generalizations, the music was divine. The church boasts one of most spectacular organs in London. It was a gift from the United States Air Force when the church was re-opened in 1956 and dazzles both the eye and the ear. Luckily, the organist was worthy of such an instrument. The church’s choir was comprised of eight singers, each professional, and together they sounded like three times as many. They really packed a wallop and their collective voice was stunning. In turn operatic, emotional, and dramatic, I sometimes felt as if I was in a film score. They deserved much better than the material they were given to work with however, as the hymns were both outdated and uninspiring. When, in our program, it was printed next to Hymn number 349 “Come, let us join our cheerful songs,” I thought with relief that this was instruction and that now we might start singing some cheerful songs, but alas, it was simply the title of the next dreary hymn. But the choir soared and the organist rocked the house and there were the occasional moments when I resisted the urge to sway along and hold up a lighter.

The congregation’s voice paled sadly in comparison. Though there was one member who stood well above. In fact, he carried the rest of us. His name was Mr. Ken Jones and I was not surprised to learn that he was once a member of the choir himself. In fact, it is rumored that he once sang for Lord Mountbatten in India. A loyal parishioner, Mr. Jones has been a member of the congregation since its second service; its first being on October 15, 1956. You do the math.

After the service, I was dismayed to find that no fellowship snacks were being offered. No biscuits and tea, no doughnuts and coffee, no oranges and lemons, nothing. We simply went home. I find church without fellowship to be lacking and anti-climactic. Worship as a member of a congregation is a communal affair and should not feel solitary. After all, what is the point of dressing up and dragging oneself out on a Sunday morning if not to mingle with like-minded souls?

In spite of the church’s name, I didn’t see any Danes amongst the congregation. I was later told that the designation refers a time when King Alfred (871-901) expelled the Danes from the City of London yet permitted those with English wives to settle just outside the city walls. It was this settlement that brought about the building of a church known ever since as St Clement Danes. St. Clement was the patron saint of mariners and his symbol, an anchor, can be found throughout the building – in spite of the fact that the church is sponsored by the Royal Air Force. Clement was reportedly an early Bishop who continued to lead a ministry even after being imprisoned by those Romans. As punishment, he was tied to an anchor and thrown into the sea. It’s still unclear to me why mariners would adopt him as a patron saint as this seems to be his sole connection to sailing.

There are also endless eagles. These must represent the Royal Air Force. St. Clement Danes is the central church of the RAF, so the eagles do make sense. Though the sheer number of gold eagles gives the church less of a religious feel and slightly more of a military or nationalistic hue.

In 1666, the Great Fire of London broke out, devastating the city and destroying 87 churches. St. Clement Danes escaped the fire yet still won a commission to be rebuilt in what must have been an interesting political maneuver. Sir Christopher Wren, that 17th century tart of London church architecture, won the commission. In what smacks of croynism, Wren, who was a childhood friend and playmate of the then current King Charles II, was hired to design 55 out of the 87 churches that were destroyed in the Great Fire of London. To be fair, Wren’s design for St. Clement Danes was spectacular. He gave the building its wide aisles and majestic sense of space that still continues to impress all who visit.

Dr. Samuel Johnson, who recently celebrated his 300th birthday, was one of the more illustrious members of the church’s congregation, though there have been many. Legend has it that he would tap his cane in disapproval during the service should the sermon not be to his liking. Nevertheless, the church built a statue in his honor, which can still be found in the back of the building.

During the Blitz, St. Clement Danes fell victim to German bombs and was destroyed. It sat dormant, home only to trees and birds until a plan was made to rebuild in 1953. The Royal Air Force made the appeal to restore St. Clement Danes as their central church and a shrine of RAF remembrance. It was decided to follow Christopher Wren’s original designs and faithfully reproduce it. Though the church is really only 50 years old, should Christopher Wren return today, he would still recognize it as his.
Other than the towering organ and the plethora of eagles, the only other notable difference from Wren’s church are the RAF books. These contain the names of all who have died in the service of Great Britain. Book I is comprised of those who passed before the RAF was an official entity. Books II through IX are the names of those members of the Air Force who died in service during World War II. Names continue to be added as wars continue to wage, though the sheer number of names of WWII books is sobering. There is also a book for the American Air Force listing the names of those men and women who were killed after the United States entered the conflict. The names of Americans who flew for Great Britain before America’s entry into the war can be found with honor in the RAF books II through IX.

The presence of these books in the church give the space a somber tone. It connects the church with the human aspect of war and makes it a pilgrimage destination as well as a place for remembrance. The books give St. Clement Danes an additional responsibility and the church’s verger said, “We feel lucky, in a way, to have this duty.”

The Keys of St Clement Danes by Crista Cloutier

In spite of the beauty, the history, and the music, St. Clement Danes only has a small handful of members. They would like more, the verger admitted, but people cannot be forced to come to church. It is simply a fact that congregation sizes are falling. “How do you get more people in the door?” he asked wistfully. I suggested fellowship snacks.