It’s a digital world. What should we let go? 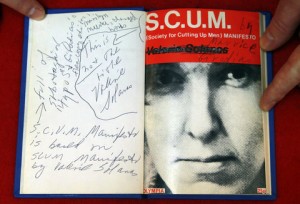 If it can be digitized, it will. And once it’s digitized, what good are copies?

Look at Google Books, which has already scanned some 15 million books and intends to digitize every volume in the world by the end of the decade — 130 million unique texts. Once a book’s on Google, you can chuck that cumbersome tome right into the furnace, right?

It would certainly lighten our load. Recently, I was with a friend and we walked past a box full of DVDs, VHS tapes, and books in front of a building on my block. We rummaged through the box and found a number of things I wouldn’t mind seeing. I picked up a DVD of The Office, Season One, and asked my friend, “Should I take this?” “If you want to own it, sure,” he replied, stressing the absurdity of the word “own.” He was right: the first seven seasons are available on Netflix Watch Instantly.

Still, I love collections: books, movies, even magazines. I like having a library, a physical reminder of my evolving interests, phases, professional development, and so on. I have a few dozen film-anyalsis and history books, for example, that I amassed during a time when I studied and then taught film courses. It’s been more than three years since I taught film, but my books are always there, reminding me of who I was.

It’s that physicality — that aura, to borrow a term from Walter Benjamin — that has inspired the Internet Archive, a nonprofit just north of San Francisco that has been acquiring and digitizing books since 1996. But unlike Google, the Internet Archive is also keeping a physical copy of the text itself, presumably for all eternity.

And that’s great. But then there are those unexpected treasures that exist in libraries everywhere, many of which will be thrown out without a thought in the coming years. Late last month, a copy of Valerie Solanas’s S.C.U.M. Manifesto, her 1968 proto-feminist rant against the Man, was discovered at the New York City Public Library — extensively marked up by Solanas herself. It seems she hated how the book was edited, and wanted to divorce herself from it entirely. “Lies! Lies!” she scrawled on the back page.

This is a treasure, and it’s not under lock and key at the Internet Archive. Who will protect it, not to mention all the other treasures, buried in the stacks, we have yet to discover?