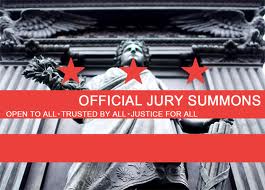 I am a high school English teacher. I have missed over a week of school due to jury duty at the DC Superior Court. What follows is an open letter to my ninth-grade world literature students.

I have missed you. While you have begun to consider issues of crime and punishment, and those of fate and free will, I, along with eleven others, have been tasked with determining the fate of one man.

You may have heard about the Chris Brown and Rihanna episode. If not, you can read about it here. If you are not familiar with the music world, you can find out more about their history here. Do you think Chris Brown was appropriately reprimanded for his crime? Some men—and, more shockingly—some women, blame Rihanna. They think it is her fault, that she somehow deserved to be assaulted by an intimate relation. Do you know about the Yeardley Love case? The man who hurt her so much that she died was, just this week, convicted of second-degree murder. He will spend the next twenty-six years of his life in jail.

In a New Yorker article about the above situation, Amy Davidson points out the disparity in the treatment of these men. This discrepancy in their punishments, she writes, seems to stem mostly from the degree to which the woman in question was hurt. Upon what criteria should a judge or a society use to determine first the guilt and then the potential punishment of an abuser? How much does intent count? How can anyone thoroughly prove intent? Does the level of bodily harm or length of hospitalization matter? But here’s the loaded question—how much, if at all, do and should a woman’s immediate reaction and later response matter?

I arrived at the Superior Court of the District of Columbia on February 15, 2012. I checked in and sat for a while. I listened to instructions that I had already read. I waited some more. Then, along with about sixty other people, I was called to be on a potential jury panel. We walked downstairs together, lined up in three rows, so as not to clog the hallway, and waited. Then the clerk of the court had us rearrange ourselves in a particular order that was not numerical. I was third in line. I was to remain in the third position for the entirety of the afternoon.

We proceeded into the courtroom, taking our seats according to the clerk’s instructions. The judge presented us with a topic list, a potential catalogue of objections we might have to any aspect of the case at hand. If you don’t know, some people’s close ties with law enforcement may prevent them from serving on a jury. Other people may be familiar with the area where the alleged crime occurred, and others may feel biased about the case for any number of reasons. After elaborating on each item on the topic list, the judge called us up to the bench, one by one. The stenographer turned on the screeching “white” noise to insure the privacy of the parties at the bench. One by one, the judge called us up to discuss the answers in our topic list. This lasted for several hours. Once everyone had spoken to the judge, the attorneys had their turn. They could use what is called a peremptory strike—a veto—to strike jurors who, they thought, might be predisposed to take the opposition’s side. Eventually, fourteen jurors remained. I was still in seat three, part of jury otherwise composed by men. Two jurors were alternates, though their identities were not revealed until the end of the presentation of the evidence.

The attorneys presented their evidence and called witnesses to the stand. We heard from the allegedly abused woman, who responded to the majority of the questions about the incident with the phrase, “I don’t recall,” even though she had, when the incident happened, called 911, spoken with the police, gone to the hospital in an ambulance, and broken her nose. She had also obtained a temporary restraining order and had testified in front of a grand jury. Her testimony, particularly her feigned inability to recall the events, smacked of perjury. After hearing the first part of her testimony I was resentful; why would she make up such an elaborate story that would consume so much of so many people’s time just to exact revenge on a boyfriend who was breaking up with her?

Later, as we heard more of her testimony, saw images of a bloody face and a bloody house, heard from medical experts and reviewed medical records, it was clear that a serious incident had occurred. She had broken her nose. I have broken my nose before. Granted, it was a different situation—I was kicked in the nose while playing soccer and knocked unconscious—but I know how painful it is. Even though more than fifteen years have passed, I recoil at the thought of that moment and all the ensuing pain. My nose is not the same as it was. Nothing short of amnesia can make me forget it. I have studied trauma, and I have read extensively about literary representations of trauma. Trauma does not disappear, nor is it impossible to recall; rather, trauma alters the way the brain processes incoming information and is something that is never forgotten.

Once the defendant testified, and once an attorney elicited information about his past, one riddled with drugs, abuse, and convictions, he lost all credibility in my mind. Despite his contentions that he has “changed his ways” and learned from the past, his testimony not only aligned with hers in such a way as to reveal collusion between them, but it revealed his angst, his physical strength, and his irascible nature.  He referred to the complainant as a “troublemaker,” saying that she would do things that he had not allowed her to do. This was perhaps a man who had learned from his past actions, but it was not a man who regretted them.  Instead, it was a man who was unable to conceive of a romantic partner as anyone near his equal.

Our jury deliberations lasted approximately eleven hours. Eleven hours sitting in an enclosed space, without windows. Eleven hours of knowing that we had to come decide, unanimously, on a verdict, before we could leave and resume our daily lives. The unanimity requirement represents a considerable burden on each of the jury members. Not only does each juror have to arrive at a conclusion, but also each juror must agree with every other juror regarding the charges. I sat quietly in this room, one woman among eleven men, for a while, recalling the charges, the evidence, and the lack of credibility of both witnesses. When I suggested that the woman’s seemingly fabricated testimony was likely a result of a victim complex, at first some of the men were hesitant. When the only doctor in the room corroborated my assertions about domestic abuse—how women who are abused continue to return to their abusers, defying all logic—the tenor changed. As the day went on, we discussed the meaning of the law, the multiple interpretations of the of the criteria for assault with significant bodily injury. I became the grammarian in the room, bringing my expertise, literally speaking, to the table, alongside that of a four-time juror, a doctor, and a lawyer.

Some jurors were more able to articulate their views than others. Some were loud, some mumbled. Others appeared indifferent. When one man suggested that the complainant was fabricating the 911 call out of vindictiveness—“women can be vindictive,” he said—I assumed the role of the female apologist, defending all women, even this one, this one whose lack of respect for herself and the law I found repulsive, against the charge of vindictiveness.

Eventually, almost everyone agreed on the verdict. I feared, for a while, that the one reluctant juror was going to hang the jury, rendering the trial null and possibly enabling repeat offender to return to destructive patterns. Imagining all the other cases like this one, I feared that so many men are set free due to a lack of evidence, the inability of the victim to express the truth, and reasonable doubt among any one juror on a case. After all, the jury is tasked with determining, beyond a reasonable doubt, whether the defendant is guilty of the charges against him. In this case, the charge was assault with significant bodily injury. We almost arrived at a resolution after the end of the first day of debating. One juror remained resolute.

The next day, after several more hours of heated deliberation, the final juror conceded. We submitted the verdict to the judge, lined up in order and walked back into the courtroom one last time to deliver the verdict. In front of the whole court, we each affirmed the verdict individually. Guilty.

There is not a clear moral to this story, and, as a friend would say, there’s no bow to tie it all up nicely. You can’t tie this one up in a bow. It’s a murky mess, one muddled not quite enough by the defense counsel. We learned that it is the job of the defense attorney to create as much confusion as possible, for a jury can only find a defendant guilty if they are certain beyond a reasonable doubt. Thus the defense strategy: cast doubt on all aspects of the case.

It is unfortunate: his fate, her fate, his ex-wife’s fate. But this jury idea, it’s radical. It’s twelve people, stuck in a small room, deciding the fate of another. Many countries do not have justice like this. We were very careful. We respected each other. We were judicious and calm.

It’s true that I have missed you, that your various substitutes did not tell you exactly what I had in mind or pass out exactly what I gave them, and you may be disappointed. I understand. I’m disappointed. too. But I hope you learn about justice and about civic duty. I spent a week away from work, but it was week in which I believe eleven men and I changed the world, just a little bit, for the better. What if the jury members had been different? Would that have changed the outcome? Maybe? We will never know. But as you read Oedipus Rex, ponder this crazy idea of fate. What is it? Are we stuck? Or are we pleased by what has happened?

I believe that we are all emotionally drained. Although we had no choice but to serve on the jury, I believe we did our job well. I believe we were a good jury. Beyond a reasonable doubt, I believe we reached, to the best of our abilities, justice.

Next post: It’s a digital world. What should we let go?