Where the Cowboys Pray 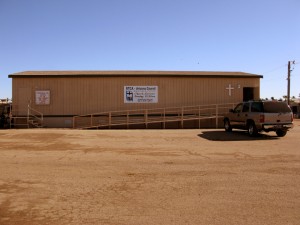 First in a series of Worship Reviews

I usually win on the horses. I have an instinct. But I should have known better than to follow the “hot tip” I received at church that morning. My horse came in third.

Turf Paradise Race Track on a warm Arizona afternoon is the place to be. But on Sunday mornings, leave the glamour and slip into the “backside” where the stables stand, and you’ll find all the action is in the Track Chapel.

Seventy racetracks in the U.S. have chapels on their backside, run by the Trans-denominational Race Track Chaplaincy of America. They serve the community that works, and often lives, at the track: those who ride, train, feed, and exercise the horses.

Turf Paradise’s spiritual needs are cared for by Chaplain John Shumaker and wife Amy, who began their careers as a horse-shoer and exercise rider respectively, before John received his calling ten years previous.

Services are held in a large trailer originally used as a portable schoolroom. Their previous chapel was condemned two years ago. Understanding the itinerancy of track life, Chaplain John and Amy opted for the temporary nature of the new building. And it was homey in spite of the simplicity of the folding chairs, carpet, and fluorescent-lighting.

The service began as the Shumaker’s young son blew a shofar -horn loudly. A special ram’s horn, John boasted, the shofar was the Biblical trumpet of the Old Testament.

We duly took our seats. There was no altar but a podium, a few music-stands and a small sound-system. Chaplain John picked up his guitar. Amy and another woman stepped in front of the mikes as another guitar player joined them. John led off with “Blessed Be the Name of the Lord” and the ladies sang backup. The rest of us following the words displayed on the wall by an old overhead projector as a young girl diligently moved the transparencies.

The small congregation sang along, cowboy-boots a’tappin, cups of coffee in hand. There was a lot of denim in that room. I even saw a pair of chaps.

Attendance can range from 15 to 50 depending upon the racing schedule. People snuck in and out throughout the service. A few cell phones rang but nobody tutted. It’s a working church in a place where the work never stops. Amy explained, “If this wasn’t here, they wouldn’t be able to worship.”

The first song ended and we applauded ourselves enthusiastically, there were even some whoops. Warmed up, we dove into “How Great is Our God.” Amy and partner sang with their eyes closed, arms waving in the air as they rocked to John’s strumming guitar. When the song ended, Amy spontaneously called out, “He IS a great God!”

“People paint the track as a nasty, dirty, rotten, filthy place, and it saddens my heart,” Amy told me.

“Well, it IS dirty,” she admitted looking at the floors. “Everyone trots in here full of shavings and manure. But it’s just like anywhere. Drugs, poverty, alcoholism, we have it all. The difference is that we live inside fences. So everything is condensed.”

When at last we were seated, Chaplain John began by announcing that Clint had been kicked in the arm that morning. And then others hollered out their news. We learned that Sean was in the hospital with pneumonia, which was really bad because he had that lung transplant. And Lee just had his fourth heart attack.

Then we all raised a hand and closed our eyes as Chaplain John raised his, detailed each issue, and thanked the Lord for healing. He spoke with so much conviction that I half-expected Clint to bound through that door. This was the “Laying of the Hands” and several people participated with an unprompted “Amen!” or a loud “Yes!”

Then Chaplain John turned to his Bible and started preaching. He led with a sermon on giving. This is where most roll their eyes, and I am not a big fan of the tithe-pitch myself, but looking around that simple room I knew there was no scam here.

It’s a hard life, beginning every morning at 8:15 when John ministers to the backside on the loudspeaker. “Many stop their work to listen,” John said, “even the horses, I’m told.

Then he “walks the barns,” ready to listen to anyone who might need an ear. Thirty minutes before the first race he leads a prayer with the jockeys. Tuesday is Bible study. He maintains clothing and food for the most needy and visits those in the hospital. These are people who support their own.
When Chaplain John finished speaking, he picked up one of the baskets himself and collected from the room. Even Amy gave.

He returned to his Bible, preaching passionately as he walked around the room. “This Bible isn’t a fairy-tale book, it’s a life manual!”

He spoke about faith, telling a riveting story about a baby involved in an accident only to recover miraculously after being prayed over. Even her Buddhist doctor was converted. “Because Buddha ain’t never cured nobody,” John said.

He recalled how his own faith recently helped him to win an iPod at the West Coast Believers Conference. “With God,” he said, “All things are possible.” He repeated it several times and many repeated it with him. And we all amen-ed.

Then everyone moved slowly to the next room for donuts and coffee. Many walked with limps and wore faces lined from years of sun and rough living. These tough men and women are fierce competitors on the track; their pay depends upon winning. But on the backside the reality of life is that few can afford or even attain health insurance – though injuries are commonplace. Nevertheless, when someone is in need the community comes together. Chaplain John maintains a Chaplain’s Benevolent Fund to augment the tithes and offerings. He said, “Lots of these folks have money or health problems themselves, but they’ll put aside their own difficulties to help someone else. They give what they can and then some. It touches me.”

We don’t see the poverty or pain from the frontside. The horses race in their pretty colors as we dream about getting lucky and winning big. But back here life takes a different tack. For the congregation of the Track Chapel there’s nothing to bet on but God and each other.

Previous post: It’s a digital world. What should we let go?