When books begin to annoy 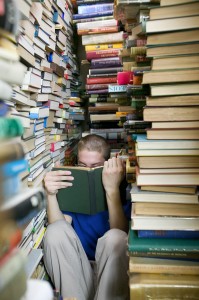 Something strange is happening to me. When I read books now, I find myself getting annoyed with them about halfway through. This is an entirely unscientific observation, anecdotal at best, and sporadic in actual occurrences. But it’s happened a few notable times in the past year, and I’ve come to a conclusion that seems to contradict my entire education: When we read, it’s okay to be impatient.

Here are two examples: Last fall, I was reading Thomas de Zengotita’s 2004 book Mediated, and I plowed through the first 2/3 with rapt attention. I was engrossed in his analysis, albeit outdated at this point, of how media shape not just our lives, but our identities. It’s a book full of fresh insights, unexpected connections, and writerly sentences that make it both interesting and pleasant to read.

And then I got really, really sick of it.

De Zengotita seemed to be repeating himself after a while. Where he started out instructive and engaging, by midway through the book he seemed pedantic and long-winded. It seemed as if he considered it his imperative to illuminate for his poor, media-defined, media-saturated readers just how defined and saturated by media they are. In short, I started to feel lectured at, condescended to, and generally irritated with each page.

A few months later, I began reading Love Goes to Buildings on Fire, a new book about the 1970s music scene in New York City by the music critic Will Hermes. I’ve been interested in that era of New York life, music, and culture ever since I was an adolescent, so the subject was perfect for a winter’s read.

For the first 100 or so pages, I found myself recommending it to every musician and New York enthusiast I know. It’s rife with quirky anecdotes about bands like Talking Heads, Television, and the Ramones; explains the unexpected creative synergy between the bourgeoning punk movement and avant garde composers like Philip Glass and Steven Reich; and paints a picture of Lower Manhattan that would appeal to any New York nostalgist.

But it’s also incredibly simplistic. The implication of fate, of these artists and their humble beginnings (because in Hermes’s rendering, almost all of them are humble) leading inevitably to fame and glory, runs through his narrative like a steel cable. He writes history like it simply had to be thus. It’s full of tautologies. Patti Smith is an icon today because, well, she’s iconic, and has been practically since she got off the bus from New Jersey as a scraggly, pregnant 18-year-old. Soon she was rooming with Robert Mapplethorpe, hanging out with Andy Warhol, and gigging with Bob Dylan. C’mon — was it really that easy? What about all the scraggly, pregnant (or non) 18-year-olds who didn’t make it?

Then there’s the prose. Try reading a passage like this without rolling your eyes: “Hilly Kristal liked Talking Heads, and invited the band to play all three nights the next weekend. Paired with the Ramones on double bills, they were the hyperanxious Manhattan yin to their roaring-id Queens yang.”

Or this, about the Queens neighborhood where the Ramones originated: “The manicured lawns and faux-English village vibe of its core, Forrest Hills Gardens, were hemmed between tightly packed apartment blocks, like the basket of a catapult pointed toward Manhattan.”

I got to page 163 and stopped. I decided there’s too much to read, and not enough time to read it all. But quitting books midway feels bad, and not only because we’re taught from childhood to stick with difficult texts. It feels bad because there’s still information in those pages that I’d like to know. In that sense, at least in this case, Hermes has done his subject a grave disservice.

Because if the writing’s rotten, who cares?