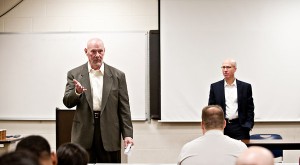 Charlie Newton and Jonathan Eig conducting one of their writing workshops for the Chicago Police Department. Photo: Peter Hoffman for the New York Times

When I was in high school, the only two writing teachers I had were guys who taught so they could coach sports. Nothing against athletics, but these guys were dimwits. Their hearts were clearly in the gymnasium, not the classroom or at an austere table someplace with a small desk lamp, polishing prose and contemplating life.

In college, writing teachers seemed to have taken on a new look: they were often female and wore their wavy, elegantly graying hair very long. They liked colorful silk scarves and dresses that flowed down to their ankles. They loved Southern Women Writers and Black Women Writers, and other voices of disenfranchisement. I respected these teachers more than I did the aged jocks I had in high school, but I related to them about as much, which is to say, I didn’t. When I met my faculty advisor for the first time freshman year, a woman exactly like I describe above, she asked me which writers I liked. I told her I liked Henry Miller, Franz Kafka, and D.H Lawrence — not bad for an 18-year-old, I thought. “Oh, you like male writers,” she said with a snarl. I soon changed advisors.

I started wondering if all writing teachers were either idiots in polyester shorts and polo shirts or self-righteous, PC-obsessed women with a collective ax to grind against the White Man. Either way, I wondered if writing, quite simply, wasn’t for me. After all, I couldn’t relate to my teachers.

Earlier this week, the New York Times ran a piece on a series of writing workshops being offered to the Chicago Police Department. The men and women who take the workshop have seen more blood, guts, and drama than most of us ever will, and they’re hoping to learn how to express their stories in prose.

What struck me most about the story, though, was the teachers themselves. They’re tough-looking guys, not unlike cops themselves. They teach the cops to never sugarcoat, to tell it like it is, no matter how ugly or offensive. I wonder if my high school or college teachers would have said the same, and even if they had, whether the writer-cops would have listened to them.

Moreover, the picture of these two guys made me reflect on my own writing teachers, and then on myself as a writing teacher. Do my students with radically different backgrounds than mine even listen to me? Do they respect me? Should they?

In the end, I was left with one question: To learn writing from someone else, just how important is relatability?

Previous post: Jane Addams and the snare of preparation