Rushdie tweets on a reality-show twit 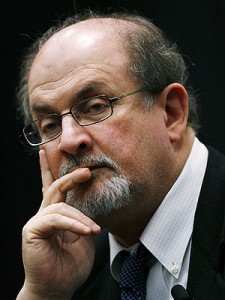 When Salman Rushdie is an earlier adopter than me, I know I’m out of step with technology. But so it is.

Using Twitter to weigh in on Kim Kardashian’s divorce from Kris Humphries (two people I frankly know absolutely nothing about) after just 72 days of marriage, Rushdie proved that he could be at once brilliant and trite in fewer than 320 characters.

In just three tweets, which he dash(ian?)ed off on Wednesday, Rushdie told the whole pointless story. Why would he bothe r?

My theory: to save us from reading actual articles on the subject. And here’s a suggestion to the entire entertainment- and celebrity press: Hire Salman Rushdie to report your non-news so that we have time for things that actually matter.

1. The marriage of poor #kardashian was krushed like a kar in a krashian