Running ecstatically towards nothing 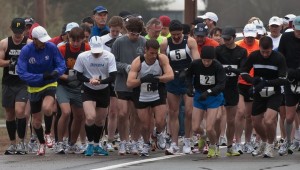 When the topic of running comes up, I have a favorite line I tell people: “I run because it gives me the illusion that I’m getting somewhere.” They usually laugh, and I laugh with them. Except it’s not entirely a joke. I’ve chronicled many grievances on these pixilated pages: academic, professional, technological. But I’ve been scant on things that bring joy, that offer a sense of victory. Running is such a thing.

Your career may have plateaued, your marriage bottomed out, your youth embalmed in a shoebox of old photographs that, eerily, don’t seem that old. Or maybe your career has taken off, your marriage is fresh (or you’ve happily chosen not to get married), and you haven’t got a nostalgic bone in your body. It doesn’t matter. Running offers something you won’t get at the office, from your spouse or children, or from remembering yourself at an earlier stage in life.

It offers an utterly in-the-moment experience. A religious person might even call it ecstatic, and I wouldn’t disagree.

But where is it taking you? Nowhere, really. And that may be the whole point.

Ours is a goal-oriented culture. We seek degrees, attain them, and move on to careers. We get promotions, move on, and build lives. Once a goal is met, we focus on new goals, until we reach the ultimate goal: retirement with enough money in the bank that we can sit back and enjoy our spoils. Such a fatalistic way to live, when you stop to think about it. No wonder depression and anxiety, and all their attendant symptoms, are epidemics today.

I’ve known hundreds of runners over the years, and the one thing they all share is a desire to be faster, to become more efficient, to reach benchmark times, whether it’s a sub-4:00 or sub-2:30 marathon; a sub-30, sub-40, or sub-1-hour 10K; a sub-30, sub-20, or sub-16 5K. The goals are different for every runner, but the drive is the same. And once a benchmark is met, a new one takes its place. And thus, the Quixotic pursuit of some intangible, ever-elusive goal persists. Because to reach an end point, an ultimate goal, would be to say, “I’m done.”

The point of running, unlike so much in life, is to never say, “I’m done.” It is to be in constant motion, both physically and mentally, towards a goal that never really existed in the first place. Or rather, it’s a moving goal, one whose value exists not in its attainment, but its chase.

So it’s not without irony that I tell people that I run because it gives me the illusion that I’m getting somewhere, but it’s not a joke either. Because the moment I reach a goal, the goal has changed. And in an odd, counter-intuitive, utterly addictive kind of way, that makes it a thrill.