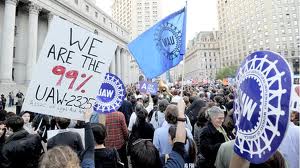 Recently, I’ve been thinking a lot about poems. My first book of poems is about to come out (obligatory self endorsement), I’ve been teaching poetry in all three of my classes (one a creative writing class, one a composition class, one a glorious class on contemporary poets in which I get to teach all my favorites), and I’ve been trying to find some time, somewhere, to actually work on writing new poems myself.

Beyond my solipsistic connections with poetry, I’ve been thinking about the task or job of poetry. Yes, poetry is word magic, we can all agree on that. Is there more reward in reading a poem than the wonder of witnessing language worked and reworked in new and surprising ways ? But what else can poetry do ? This year’s U.S. Poet Laureate, Phil Levine, seemed to me to be particularly well chosen given the current economic crisis. What poet could better represent a downtrodden and disheartened American people than the author of What Work Is, a collection of poems that probes the very ideas of hard American work, of class difference, of economic peril.

In the title poem of that collection, the speaker, in line for possible work at an auto plant, reminisces about his bro ther, who works night shifts at Cadillac so he can study and sing German opera during the day. The speaker wonders when the last time he embraced his brother was, and realizes he’s never done “something so simple” because he doesn’t know what work is. The definition of work in the poem slides from physical labor, to the study and love of art, to the work of human intimacy.

I’ve been trying to think of some poems that might speak to the Occupy Wall Street movement currently underway in New York, and in cities and towns across the country (the 50,000 person town where I live in Wisconsin had its own Occupy rally yesterday). The protestors, including students who can’t find work and are burdened with sickeningly large student loan debts, the unemployed, retired persons facing benefit cuts, veterans, union members, and political activists, are expressing a sentiment that I think runs deep in America right now: frustration—frustration with a banking system that bankrupted our economy, frustration with executives making gobs of money while ordinary people face eviction from their homes and increases in utility and grocery bills they can’t afford, frustration with a regulatory system that has failed to regulate and failed to punish those whose actions directly contributed to the economic crash, frustration with the lack of adequate taxes on the wealthiest 1%.

And what can poetry do in response to or support of these protests ? A common criticism of American poetry is that it is apolitical. Perhaps the Occupy Wall Street movement can spark some poetry that, like Phil Levine’s What Work Is, proves this assumption wrong.