by Amanda Leigh Lichtenstein on August 10, 2011 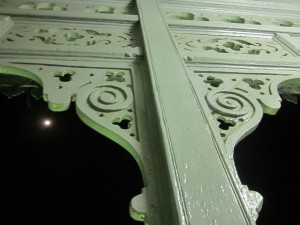 A view of the Ramadhani moon, shining bright on the verandah.

August 1st was a kissless morning. My love, a Muslim, had decided to abstain from even the smallest smooch. It was the first day of Ramadhan. Twenty-nine more to go. I am a Jew living in Zanzibar, a predominately Muslim island. I accept that I have to figure out ways to get down with the holiest month of the year – embrace its grace, understand its power, respect its presence.

No kisses. No water. No food. No impure thoughts.  Reign in the rage. Be kind. Be patient. Be peaceful.

I like God. I like doubting God. I like the things we do to figure out our relationship to God, all the patterns we make or break, the habits we feign or reveal in the honor of something greater than ourselves. It’s energy made of all energies. It’s light made of all light. It’s sorrow made of our collective will to live.

I am always up for at least the first day of a fasting challenge, especially when it’s about tearing off a piece of God’s bread — faith.

I lasted until about three p.m. that first day, until a spiky bout of bitchiness took over my being and I broke down with a fistful of ginger biscuits in the corner of my office, hiding from my devout colleague, who, while tolerant in my presence, clearly removes herself from even the hint of a crumb in d aylight hours. Fair enough. But I was grouchy, and had not woken up in the wee hours of morning to fill myself, as others had, to ready themselves for the first fast.

That initial week went smoothly enough. Each day I could stretch a bit farther, a bit longer, until my hunger stalked me and I caved. Still, the message was coming through clear — empathy for emptiness. It gnawed at me. I could have a humble peak into the experience of deep craving. It was an honor to try and fail.

But I have to admit, I’d been really down on Ramadhan lately — or perhaps not Ramadhan exactly,  but myself within its folds. It takes immense faith to fast and I just don’t have it, the will to reach sunset for Allah or my Zanzibar compatriots. I realize that radical lessons on patience and spirituality lurk in the twilight hour of hunger.

But I decided not to fast this year beyond that first week, when my feeble attempts at restraint sort of got the best of me. I thought: I’m doing people a favor by not fasting. It’s just — much better this way (I convinced myself).

Even having decided not to fast, though, I end up fasting by default for lack of food and drink availability on the streets. No restaurants are open for a plate of simple food at a fair price. It’s all fancy pizzas and chocolate cakes behind the infidel’s curtain, so it costs quite a lot to defy God this month. ‘

I was also down on Ramadhan because of the higher frequency of robberies and theft on Stone Town streets, some involving knives and verbal threats. Among discussions between both locals and wazungu, it’s either blamed on bara (those from the mainland), the hunger to fulfill a bountiful Eid, or drug addiction. Whatever the reason, I’ve felt uneasy to walk around the darkened city alone, especially between the hours of 6:30 and 9:00, when all who are devout find themselves at nightly iftaris, feasting before the next day’s fast — a Swahili buffet of potatoes, rice, cassava, thambi (sweet spaghetti), and other culinary delights.

At sundown, those who fast can be found at a clip making their way to these feasts, leaving the streets desolate and quiet, and often pitch black during these days of erratic light. In the hours leading up to sundown, the energy quickens in the streets, an edge, a low-grade panic, a slow boil, a cloaked peace, an inner calm that fights against the material world of clay and cup, coffee and craving. The air is pinched with a disciplined spirit, shutters shut on the regular, local joints. The streets feel strange without their simmering kettles of frying kachori and hot plates of chapati.

Castaways from other religious or wayward shores roam those strange streets. The Hindus, the Christians, the Jews, the drug addicts, the unassuming traveler from Sweden with her pink shorts and spaghetti strap tank-top. We’re all there, walking with abandon, abandoned.

I’ve been stumbling through Ramadhan this month, wrestling with those twins of ritual & faith.

But tonight, around midnight, we were startled by the sharp, rhythmic cheer of a troupe of troubadours who, chanting Islamic chants in the darkened streets, just outside our house on Sokomohogo, lit up the streets with their low, sweet drones, trailing behind them a children’s brigade of breath and beauty. 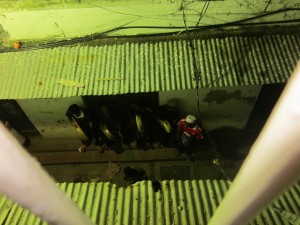 The neighbors had gathered around this troupe of mostly boys with hand drums, to join in the chant and cheer. To keep the prayer chants going — a roiling, rhythmic, choral frenzy in both Swahili and Arabic –neighbors threw coins from their open windows.

The idea is to wake those who might have dosed off to remind them to eat their daku ((late night meal). So they beat drums, chanting dua (prayers) and dancing in the streets, a festive, raucous affair that might seem sort of at odds with traditional Islam but right at home in East Africa.

So there we were, in flip flops and house clothes, rushing down the rickety wooden steps of our tall Stone Town palace to partake in the cheering and chanting with the daku drummers as they sang  MUSLIMS, WASALAM ALAYKUM! A-LAYKUM SALAM! and the THE FIRST WORD OF THE WORLD IS ALIF. The little ones shook their booties and waved their kangas in the air, spinning round and round in dizzy splendor, yelping and hollering, clapping and cheering at the end of each song.

The base drums kept beating like hearts all through the street, more and more African as the chants wore on, shifting from Islamic prayer to straight up African dance party in the street.

And so I fell asleep that night loving Ramadhan, knowing that the children cheering in the street are cheering for the love of rhythm, which is one of God’s best gifts.

And now each night we wait for the holy troubadours with anticipation. They know to serenade us now. And my love is now accustomed to racing up the steps back to our wide living room, after swaying through a chant or two, to fling open the white shutters of our broken-glassed windows and throw money down below, shouting MORE MORE, tena, tena!

And the children keep gathering like a swelling parade of low chant and high love, hip sway, heart pray, beating rhythms, dancing, clapping, woo-weeing into late evening, into the latest night, drums pushing us farther and farther into the center of things.

Nothing like drums to stave away the hunger and the danger of the streets.

I call for troubadours of peace & holy love to march through the streets nightly!

And throughout the day as well.