Denied the right to vote 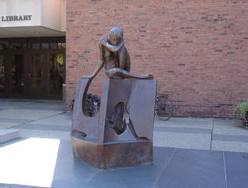 A statue outside of the public library where I would have been elligible to vote before Scott Walker signed the Wisconsin Voter ID Law, lengthening residency requirements, this spring.

When I last lived in Wisconsin in 2006, voting was easy. Wisconsin had a bevy of accommodations which made it easier, rather than more difficult, for people to vote, including same day voter registration, registration without photo-ID, and a ten-day residency requirement. My husband and I moved back to Wisconsin in the end of July so I could take a job as a Visiting Assistant Professor at a local university, and I was excited to vote in the recall election of Republican State Senator Dan Kapanke, who voted for Governor Scott Walker’s union-busting budget this spring.

You can imagine my surprise when I went to my local polling place today to vote and was told that I cannot vote because, although I have a valid Wisconsin driver’s license, have registered my car in Wisconsin, have switched my auto and renter’s insurances to Wisconsin policies, and a have a one-year residential lease in the city where I live, I have only been living in the state for ten days. You see, under the new Voter ID Law that Scott Walker signed in May, the residency requirement for vot ing has been raised to 28 days. Soon, under the same law, Wisconsin voters will be required for the first time ever to show picture-ID when they head to the polls.

These new voting restrictions are accomplishing what Scott Walker hoped. They’re disenfranchising voters: people who do not have the required paperwork to prove residency (for instance, the homeless), people without state issued IDs (the poor, the elderly, those without cars), and people who (like me, or say the tens of thousands of college students in this state) move often. These are people who are already vulnerable to voter disenfranchisement, many of whom (poor people, students) often vote for Democrats. While state officials are expecting a high voter turnout for this election (40%-50%), I can’t help but wonder how high the turnout might be without these new, restrictive poll laws.

And so I say, congratulations Scott Walker: you’ve successful stripped the masses of their voting rights! I can’t wait to help vote you out of office when your recall comes up. And don’t worry, I’ll have been living in Wisconsin for well over 28 days by then.