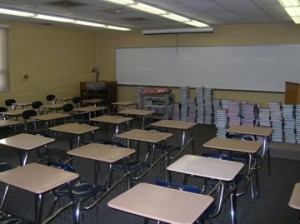 Illinois has dropped writing skills from its standardized testing for high school juniors and will focus only on reading and arithmetic. Officials claim that this will save the state $2.4 million. Writing tests for younger pupils were dropped last year. So now they can type (using their thumbs) “u r 2 dum 2 x-pres urself, dude, LMAO” without even the slightest twinge of disquietude or sense of loss.

The opening lines of this post were written by my father, a professional writer, lifelong resident of Illinois, and a product of its public schools up until he went off to college, at Augustana in Rock Island, where he majored in English. He posted them on my Facebook wall, suggesting that I write a blog post on the topic. Excellent idea, I thought. But I thought I’d do so by way of some family history.

My father’s childhood was spent in the small town of Kewanee, on the western side of the state just south of Rock Island, where he and my mother have lived for the past 33 years. My mother was born and raised in a Chicago suburb, and attended public schools there until she went to Augustana to study French and German. She’s also quite fluent in English. I was raised in Rock Island and attended public schools there until I was 14, when I escaped to the greener pastures of the Iowa public school system, just across the Mississippi River. I’d grown weary of the overcrowded classrooms, drug-sniffing dogs, metal detectors in every doorway, and getting mugged in the bathroom by wannabe gangbangers. My parents, like me, could tell that I was not receiving a decent education at Rock Island High School, and that I might even drop out merely to spare myself the constant headache of being there.

And that was more than 20 years ago. I can only imagine that the quality of my first high school has declined even further. Now, with the state deciding to save money by cutting writing skills from its list of requirements, how much worse will it get ?

If you ask my father, whose entire career has been built upon his superlative grasp of the English language — as a teacher, a journalist, a speechwriter for John Deere, and for the last 12 years of his career, the editor of a magazine with international distribution — I suspect that he’d tell you that this won’ t save Illinois money. To the contrary, it will cost the state, and the nation, billions. What’s more, neither he nor my mother would ever grow into the people they became if they were going through Illinois public schools today.

Nor, for that matter, would have Abraham Lincoln.

Generations yet unborn being allowed to pass through the system without grasping basic language skills can only signal the demise of civilization. And if you think I’m being extreme, show me one illiterate society that has prospered. Or just go watch Mike Judge’s prescient, and hilarious, film, Idiocracy.

Next post: Glamorous repression: a review of an unpublished review