The cost of doing po-business 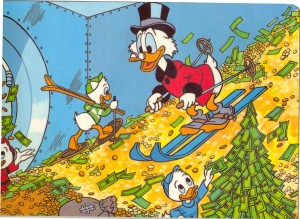 Schrooge McDuck has enough money to pay poetry contest reading fees, but many young poets do not.

Anyone in the United States who has tried to publish a first book of poetry has run into the bind of the contest reading system. One of the only ways to publish a first book (and increasingly, a second or even third book) is to enter it into one of a rapidly proliferating number of contests, all of which charge “reading fees.” These fees, which can range in cost from $10-$30, are in theory supposed to cover costs on the presses’ ends for paying readers, printing, sorting, filing, etc.

For a writer in the early stages of her career, they can really rack up. I had been sending my manuscript out to contests for three years before it won a prize (and publication), and was probably averaging five contests a month. I’ve never done the math to figure out how much I spent on reading fees in total, and I don’t want to now. It’s a figure I’d rather not spend too much time thinking about.

Many people complain about these fees. They’re expensive, and writers who don’t have books yet are often the least able to afford them. In my case, it took getting a book to get an academic job that will pay enough for me to spend upwards of a hundred dollars a month on “reading fees.” Now that the book is under contract, however, I don’t need to spend money on fees anymore.

On the other side of the reading fee business equation are the presses who charge them. However, the contests don’t necessarily seem to be a winning proposition for them either. I’ve heard several editors say that the fees they collect barely cover the costs of doing contest business. One editor I heard speak recently said that the process of running a contest was so  labor intensive that even with the money from reading fees his press decided to stop running them.

It seems to me that the world of poetry would be a better place if contests stopped existing and presses simply selected manuscripts that they thought were worthy of publication. I’d hazard to guess that many poets and editors out there agree with me. The cost of these contests keeps talented but broke poets from sending their work out, and the zero-sum, winner-take-all model of publication seems reductive, and puts in place a system that sometimes rewards the fashionable over the innovative. Having said that, I’m not sure how the business of poetry can escape the contest model now that it’s so firmly entrenched. How do you go back from a broken system if it functions just well enough to maintain forward momentum (in this case, just well enough to keep books coming out, and to keep would-be authors strung along on the hope that their book will get taken if they write just one more check)?

Previous post: He chooses the funeral over the poetry reading