A more lavish Lolita: Reading and writing as a synesthete 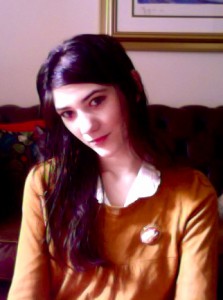 I was first drawn to the novel Lolita, at the age of sixteen or seventeen, not f or its literary merit, nor even for its salacious reputation. Quite simply, I had read somewhere that its author was, like me, a grapheme-color synesthete: someone who perceives letters and numbers as being inherently colored. I had possessed this trait for as long as I could remember (as a child, my favorite color was yellow, because the first letter of my name was); only recently, however, had I learned that it was something out of the ordinary.

Five years later, I am yet to find a writer whose words appeal to my senses as intensely and as accurately as Vladimir Nabokov’s. His attention to detail, particularly chromatic, is paired with a fluency that allows him to cross the boundaries between the senses as the mood takes him. Synesthesia is often associated with visual thinking, and a heightened memory for sensory perceptions: qualities that are undeniably of use during the writing process.

The experience of synesthesia was frequently idealized by French Symbolist poets such as Rimbaud and Baudelaire. Rimbaud himself considered the aim of the poet to be “to arrive at the unknown by a disordering of all the senses”, something that may be achieved, in part, through synesthetic devices. In his epic prose poem, A Season in Hell, Rimbaud explicitly evokes the experience of grapheme-color synesthesia:

I invented colours for the vowels! —A black, E white, I red,
O blue, U green.

Whether or not one is actually a synesthete, I believe that most writers are, on some level, concerned with the overlap between the senses; the endless associations that can be made between colors, shapes, smells, feelings, and so on. Likewise, writers – and poets, in particular – tend to be extremely sensitive to the beauty or ugliness of different words, and the ways in which these words can be combined and laid out on paper. I am therefore inclined to think of my synesthesia as an extension of the typical writer’s overinvestment in words: an extension th at involves the perception of colors, and hence turns writing into a more painterly process than it might otherwise be.

Laura Elizabeth Woollett is the author of “Vaucluse” in the summer 2011 issue of Contrary.

Next post: On a run, looking for answers about an inexplicable crime