In 1999, my first writing workshop: Napa Valley Writers’ Conference. Yes, in the Napa Valley. St. Helena. Mark Doty was there. David Lehman. Jane Hirshfield. Richard Bausch. (I always get him and his brother confused, never remembering which one it is I met. Which is terrible, given that we actually had a conversation at the picnic about Atlanta.) Elizabeth McCracken. Lynn Emanuel.

To write this post, I pulled out my file on the conference and found notes on a lecture Richard Bausch gave on the ” Value of Exposition vs. Show Don’t Tell.” Which is basically what I wrote my critical essay on for Vermont College of Fine Arts in January. I didn’t know enough in 1999 to take it all in. Which was not the intended point of this post. Still, a good craft essay is worth rereading every six months or so, when we might be ready to absorb the next piece of the puzzle or when we might be struggling with some new aspect of writing.

In any event, I began this post to write about the poet Lynn Emanuel, who visited VCFA during the winter residency. I had a book of her poetry on my shelf that I had been rereading in the fall even before I knew of her visit. She had signed it, but I couldn’t remember where or when. At some point, I thought: Napa. 1999.

And yes, when I introduced myself after Lynn read on January 7, 2011, she confirmed what I just reconfirmed by pulling out my file. We were both there. In St. Helena at the Napa Valley Writers’ Conference in 1999.

Her book, Then, Suddenly, is filled with poems about writing, about inhabiting the other whom we become as we write. Lovely quotes from Italo Calvino, Albert Einstein. And from Edmond Jabes:

The book is the subject of the book.

Far
from The Dig and Hotel Fiesta

I will study her longing for far, for everything
to be more
must travel by eye and she (that more distant
I) will set no limits

Persona
from Then, Suddenly

… On my finger I bore the tourniquet
of  his ring, and I was happy inside my lonely
rayon blazer when a voice said suddenly– 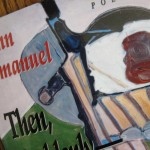 Next post: Live from the sky: liminal notes and observations from Addis to D.C.