Live from the sky: liminal notes and observations from Addis to D.C.

by Amanda Leigh Lichtenstein on June 5, 2011 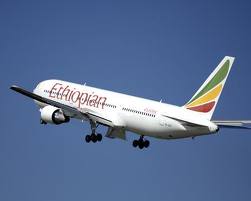 These notes have been written between countries — in that space beyond countries — where borders are only imagined and the world below looks like a pregnant map relieved of all its flatness.

I’m writing in that mildly frantic but sleepy traveler’s space: counting backwards to determine local time, attempting to reconcile body with mind, and telling myself that I can do this, make this radical leap between worlds, in the short time span of a week.

But I can’t quite shake the fact that I won’t arrive anywhere with any clarity, my being befuddled by the sudden ticking of new clocks.

The poet Mark Strand writes that “we all have reasons for leaving” and that he leaves “to keep things whole.” But all I feel when I travel is a sense of scattering, and it’s those tiny things we do as travelers to keep ourselves from feeling like we’re falling apart. The obsessive checking of important documents and papers, the purposeful tying of strings and zipping of zippers, the careful appliqué of lip gloss in sterile airport bathrooms, the intense inspection of the face – your face, the traveller’s depleted face – in said airport’s mirror.

I’ve been stopping off in Addis Ababa like it’s my new local hangout. I guess it’s because it’s one of the only cities in the world that links directly with Zanzibar airport, with daily flights to and from Addis to Stone Town and back.

I’ve never actually step foot on Ethiopian soil, but I’m totally allured by the sights and smells of this airport, and all the world rushing in through its gates — Africans and Asians, Europeans and Arabs, and the s0ft-drawl Americans on their mission trips, all converging at the low-lit Addis airport, lingering in smoky cafes or silver shops, bookstores and clothing boutiques, waiting for flights elsewhere, homeward bound.

This was my third time passing through Addis, and because I love the inwardness of singular travel, the chance to be silent and observe, I sort of dreaded the realization that I’d be flying from Zanzibar to Addis on the same flight as my politically charged neighbour, whose mission is to inform the world about the lies and cover-ups of Zanzibar history.

I am mostly a willing audience, having been perplexed myself by Zanzibar’s confusing past.  But to be honest, I was exhausted by the prospect of having to h old up a political conversation held in Swahili at the Addis airport on my way to America.

I was relieved, then, when we said our eventual goodbyes, he on his way to Dubai, me on my way to D.C. But only after making an impossible promise to go check out the National Archives in D.C. and dig up the CIA papers of Julius Nyerere, specifically: the circumstances of his death.  That’s right, my neighbour insisted that I must find and download this information for him and bring it back to Zanzibar.

With this looming promise made, I was left to wander Addis airport hallways alone, taking in the scene.

An airport frames the most basic picture of the culture of the country through which you travel. What gets transmitted is a Cliff’s notes understanding of a place. Without having entered Ethiopia, I read its silver and silk, it’s Coptic Christianity, its resilient Rastafarianism, its Italian espressos and pizzas, its thick village coffees and leather works.  The airport always tells such a simple story of the place. It’s the greeting card version of reality, the story told to keep the story from being told.

There, among the regal, dark men wearing flowing, long embroidered kanzu and kofia, among the dark, silk-draped women with tattooed faced and necks, heads covered in see-through black scarves, among fancy European lover couples on their escapades across Africa, among Filipino business men chain smoking in by the bathroom, among blinged out cosmopolitan Africans with enormous leather bags and freshly pedicured toes, among pimply-faced Texan mission teens armed with scruffy pink backpacks, neck pillows and tattered sci-fi novels — is me, waiting for my flight.

And it’s a quiet version of me, staring out at the rest of the moving world, attempting to anchor each person to a possible story. How did we all get here, in this particular momen t?

They all appear so solid and sensible, prepared.

The women snugly hug their chubby Ethiopian babies slung tight at the hip or belly. They gently tap their bottoms with soft white hands bejeweled with large wedding rings. They kiss their babies’ cheeks, massage their tiny legs, look into their eyes, and love them, seemingly unaware of how the rest of the airport might be watching their encounter as part of a larger globalization story.

The dads playfully chase the few toddlers in the group, running through the vast expanse of the airport beyond the edges of the seating section. They have the ease and stance of suburban park-going dads. They laughed heartily, with each other and the children, offering them sips of water from sippy cups, consoling fallen, tearful children with sweet, low whispers on their knees, or disciplining them with firm voices should one run away and go through a stranger’s purse.

On the plane heading to Washington D.C., I sit adjacent to one of the American couples and their two older Ethiopian children, a boy about 8 years old and his sister, probably 6. The little girl ecstatically grips everything around her, wiggling in her seat, and shows them each to her new mom – the headphones hold deep fascination, the in-flight magazine, incredible, the blanket, delightful, the touch-screen television, brilliant.

I am not the only one with a curious eye on this family. Suddenly, an older Ethiopian woman sitting in front of us leans over and asks the new mom, in English, if the two children are hers.

“Why?” The Ethiopian woman asks boldly, but with a softness in her voice.

“They lived with their grandfather who is almost 83 years old. Their parents died. He was getting sick. He couldn’t care for them anymore. We wanted to help them.”

“Do you speak Amharic?” The Ethiopian woman asked.

“No,” the American woman said, shaking her head a little sheepishly. “We don’t.”

“Do they know English?” The Ethiopian woman asked.

The Ethiopian woman then leans further over across the aisle and starts talking to the little girl in Amharic, asking her a series of questions in what seems to be a loving, concerned tone. The girl answers mostly with one word, a little sparkle in her eye in realizing she can fully understand this woman’s language. They talk for a minute or two until the American woman gently interrupts and asks,

“I’m sorry – what is that you’re asking my daughter? I don’t understand.”

“Oh, nothing, really. Just asking about her journey,” said the Ethiopian woman, who then leaned back in her seat, smiled at American woman, and seemed to want to rest now.

I’ll never know why this group of young Americans decided to adopt Ethiopian babies and children and I suppose it’s not my business, either. Love is love. Family is family. I know really amazing couples who’ve adopted children from various parts of the world. If the need is there and the opportunities available, then why not?

But perhaps, because most seemed to be around my age or younger, and because many wore gold crosses around their necks, and because most, if not all, had the glaze of happy new parenthood in their eyes, I suppose I contemplated this phenomenon way more than it might have deserved.

First, because I’m curious about the way this period of history will be remembered – that time when mostly white Westerners flew to the African continent to save children from desperate situations. It’s true that there are many children orphaned or in despairing situations, but how do these adoption policies reinforce or even inadvertently repeat worn colonial patterns?

What was that goodbye like for this grandfather and his two grandchildren?

And second, because I want a family of my own, I am not sure when or if that will happen, and seeing this dynamic made me seriously question if I could consider international adoption. It throws up every question of language, culture, class and country up in the air. It challenges our circles of obligation, our desire to love beyond borders, to universalize that which is still very much trapped in the specificities of law and language, culture and nationhood.

There on that plane, new families were being formed and molded, new dynamics set to be remembered and analyzed, the struggle and the love of it, definitive. I sat on that plane, envious of all this new love forming around me, and also moved by the fact that people who want families make them – one way or the other.  I have to believe it’s motivated by no other reason but love.

Next post: A portrait of boredom and boredom’s agents