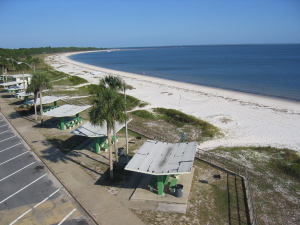 An aerial shot of the picnic tables at Carra bel le Beach, Florida

On Friday night I officially finished my PhD in English at Florida State University. I’ m entering into one of the worst acade mic job markets in recent history, with a slim chance of finding a position teaching in a university. Perhaps needless to say, it’s been hard to maintain hope that the degree I pursued for five years is going to lead to the sort of position I imagined it would.

Florida State University is located in the Florida panhandle, that is, the part of north Florida that touches the northern rim of the Gulf of Mexico. Consequently, the surrounding area is not made up of the theme parks, palm trees, and Latin mambo-beats that many people associate with Florida. My house is located less than thirty miles from the Georgia state line. Tallahassee, where I live, is a pretty Southern city. Perhaps because of that, Florida State University asked a correspondent from Fox News to give the commencement address at Friday night’s graduation ceremony.

According to her commencement address, Shannon Bream mostly covers Supreme Court rulings for Fox News. In her speech, which was filled with the sorts of clichés that are all too common in commencement speeches, she encouraged students to view their graduation as a beginning, not an ending, and to persevere, never taking “no” for an answer. She then catalogued a number of situations in which she had been told “no” on her path from law school graduate to television journalist, many of which left me with the conclusion that, after she “prayed on” her decision to become a television journalist in the face of an overwhelming tide of rejection, Bream, a pretty blonde with a nice smile, probably took the job at Fox News because no respectable news organization would have her.

In sum, her “go get ’em, tigers” speech left me feeling uninspired, particularly as the rejections for some of the fifty plus academic positions I’ve applied for continue to roll in. Is this the moment in this blog post when I realize that I, the ardent liberal, have something in common with the Fox News reporter/pretty-face? It probably should be. Fox News, do you have a job for me too?

Yesterday, after the graduation hubbub was over, my fiancé and I drove my dad, down visiting from Wisconsin, to Carrabelle Beach, a small, public beach with picnic tables that always remind me of the beginning of The Flintstones cartoons, when Fred orders those giant Brontosaurus ribs at the drive-through that he knows will tip over his car every time. The road to the Gulf was packed with weekend visitors, slow-moving RVs, and locals in trucks heading out to cast crab nets or catch mullet fish. I got frustrated with the slow-down, speed-up traffic, frustrated with my inability to find a job in the career I’ve trained for for so long, and began speeding down the highway, passing cars, sometimes three at a time. It felt good. I felt powerful for a moment, like I knew how to navigate the congestion better than the drivers around me, accepting their slow-moving fates.

Then I got pulled over in a speed trap, and issued a speeding citation. I hadn’t been pulled over in years. My dad was in the back seat. It was humiliating. As I sat on the side of the road while the officer printed out the citation in his car, lights flashing, I began to wonder where I was trying to get to so quickly. This question has broader implications in my life, and probably broader implications in the lives of many recent graduates. But, coming off the hangover of five years of doctoral course work, of doctoral preliminary exams, of dissertation writing, defending, and submission, it’s too hard for me to connect the dots right now.