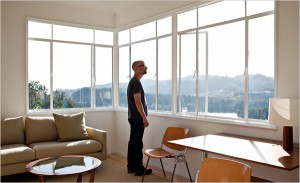 It’s safe to say that Moby is pretty damn famous. While his popul arity m ay have peaked in the late 1990s, with the release of Play, that album nevertheless secured Moby a spot in the pantheon of techno gods. He has made millions in album sales, licensing contracts, vegan cuisine, and bottled teas. His restaurant, Teany, on the Lower East Side, was tiny but always packed until it was gutted by a fire in 2009.

I don’t think about Moby that often. I liked Play and think it’s interesting that he’s related to Herman Melville, but otherwise he’s just not on my mind. As a friend of mine said once, in the summer of 2000, “Moby is so six months ago.” Which is why I was surprised to see him featured in the Home section of yesterday’s New York Times, and even more surprised by how fascinating it was to me. The piece focuses on the places Moby has called home over the course of his life, 45 years and counting.

There was the large Colonial in suburban Connecticut where he lived with his mother, the empty warehouse with neither running water nor heat in Stamford where he composed his earliest tracks, and the enormous house in upstate New York, which he bought after hitting it big, with a 1,500-square-foot bedroom that left him sleepless every night. He moved his mattress to the closet.

Moby’ s late st acquisition is a castle perched high in the Hollywood Hills. He says he moved to LA to escape not just New York winters, but also, suggests the article, a city that makes it a little too easy to party. He had a habit of shutting down bars and then inviting everyone who was still there, at 4am, back to his place in Lower Manhattan. Once, he discovered three strangers smoking crack in his bathroom at 6:00 in the morn ing. So he quit drinking and moved to sunny SoCal. (Good luck with that.)

But enough factoids from the article — you can read it yourself. What struck me about it is Moby’s loneliness, which is apparent in just about every sentence throughout the piece. He comes across as a latter-day Citizen Kane, roaming the cavernous spaces of his abode with neither love nor friendship to keep him warm. Indeed, he even invokes Orson Welles’s creation in describing how he felt living in a $4.5-million apartment on the Upper West Side, which he sold on account of, yep, loneliness.

Why am I writing about this here, you might ask. Because as an artist, Moby has made an indelible mark. He is an icon of the 21st Century, an emblem of the go-go early Aughts, a poet of our time. And I, for one, find this side of Moby, the human side — that is, not the side that creates seriously groovy tracks and trendy soft drinks — to be something of a revelation. We tend to fixate on the surprising/unusual/ancillary aspects of cultural icons’ lives once they’re gone — Wallace Stevens’s work as an insurance salesman, Nietzche’s syphilis, Paul Tillich’s philandering ways. It humanizes them for us. But we’re less inclined to think about those aspects while they’ re still alive. Maybe reality TV and the blogosphere have changed that slightly, but we still like to idolize our idols.

I’m glad that Moby’s been humanized for me, and in such an unexpected place as the Home section of the Times, and I may just go dust off my copy of Play. Maybe it’ll even sound new.