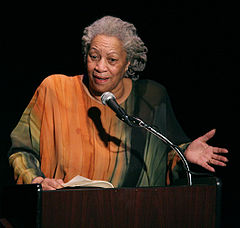 By now you’ve probably heard about Toni Morrison’s next big speaking engagement: the commencement address at Rutgers University in New Jersey. The Nobel Laureate will receive $30,000 and an honorary doctorate for the speech, scheduled for May 15th th is year.

Let me state upfront that I like Toni Morrison. I first read her as a young college student interested only in writers like Henry Miller, Franz Kafka, and D.H. Lawrence. As my freshman-year advisor, a feminist English professor who specialized in women writers of the American south, disparaged me during our first meeting in her office: “Oh, you like male writers.”

I read Beloved as a sophomore, and Morrison opened my eyes to a whole new world of literature. In my first teaching job, at a troubled university in Chicago’s South Loop, I taught The Bluest Eye in a humanities course on “beauty”  to 35 students who could identify with that novel far more than I ever will. To this day I remember those sessions as teaching at its best: students previously uninterested in liter ature coming to life, discussing a text with passion and insight, finding themselves in its pages.

So this is not to say that Morrison does not deserve to be rewarded. She does. But should Rutgers be paying anyone $30,000 to do something that until recently was considered an honor in its own right ? Indeed, this is the first time in 245 years that Rutgers will pay anything for a commencement speech.

And while the university claims that Morrison’s fee will not be taken out of tuition but from a vending contract with Pepsi, couldn’t Rutgers just as easily spend the money on something else, like, oh, I don’t know, books?

Beloved and The Bluest Eye included, of course.

Next post: Willie Nelson to sing for his freedom

Previous post: What Mary Oliver has done with her one wild and precious life