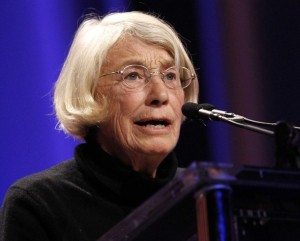 For a lifetime Mary Oliver has gently secluded herself, walked the woods, sent bottles out on the tide bearing simple messages that reconnect humanity to a beauty beyond us. Now we know why.

In an interview with Maria Shriver Mary Oliver reveals she was sexually abused when very young, that with eroded trust she withdrew from society—”I very much wished not to be noticed, and to be left alone, and I sort of succeeded”— and that she writes because “with words, I could build a world I could live in.”

Maria Shriver’s interview with the rarely-interviewed poet appeared this month in O Magazine. The interview is itself a poem, thrilling and stirring at the edge of thought, but not much because of Shriver, who asks questions like, “Can you tell me about that?” and “Yes, I was going to ask you about that.”

Or maybe that’s by design. Shriver’s absence may be the slate for the lilting piquancy of Oliver’s replies.

Maria Shriver: You try to praise.
Mary Oliver: Yes, I try to praise. If I have any lasting worth, it will be because I have tried to make people remember what the Earth is meant to look like.

Whenever I have read Mary Oliver’s poems I have wondered, “Buddhist?” In part because of their confidence in a light that infuses the world. And in part because her books return to me aga in and again in the hands of Buddhists, her poems on the lips of Buddhists. Millions must wander the earth who have been enlightened twice— by the Buddha and by Mary Oliver.

But she’s not banking on reincarnation when she pleads, “Tell me, what is it you plan to do with your one wild and precious life?”

She tells Maria more about her idea of spirit:

Maria Shriver: When you talk of the spiritual, though, you’re not talking about organized religion.
Mary Oliver: I’m not, though I do think ceremony is beautiful and powerful. But I’ve also met some people in organized religion who aren’t so hot. I’ve written before that God has “so many names.” To me, it’s all right if you look at a tree, as the Hindus do, and say the tree has a spirit. It’s a mystery, and mysteries don’t compromise themselves—we’re never gonna know

Well there you go. That last sentence should retire, as far as I’m concerned, all the tedious and tired mutu ally dogmatic arguments echoing between theists and atheists.

Wait. There’s one more passage I must quote. Mary Oliver, who’s your favorite poet ? She can’t name just one:

I suppose it would have to be Whitman, unless it’s Rumi or Hafiz. And I do love Emerson’s poetry. And of course I named my dog Percy after Shelley. And how could anybody not love Keats.

Unknowingly she names a Pantheon she is destined to enter. Echoing across the future, Oliver’s poems will mark our time on earth—I mean ours, yours and mine—long after our time is up, and they will give the future a much better impression of us than we deserve.

Tip of the cap to Linda Seeley for pointing us to this interivew.