Willie Nelson to sing for his freedom 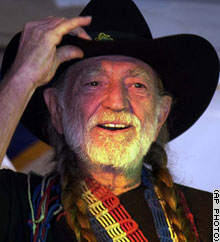 On his way back into the United States from Mexico last November, the 77-year-old country crooner was arrested for possessing six ounces of marijuana. Border patrol agents in Sierra Blanca, Texas searched Nelson’s tour bus after smelling weed wafting out of it, they say, which isn’t hard to believe — Nelson is a prodigious pot smoker and has been for longer than most of us have been alive.

Even so, this could have been bad news for the Red-Headed Stranger: while amounts under three ounces are considered misdemeanors, six ounces is serious business.

But wait! After some “packaging was removed” — huh? — the six ounces magically turned into less than three. Even so, Nelson, who has been out on bond s ince November, still faced up to six months in prison. This week, however, he was offered a plea bargain: pay $100 and sing a song. Judge Becky Walker demanded that the next time he’s in Hudspeth County on tour, he has to make a stop at the courthouse to serenade Walker with her favorite tune, “Blue Eyes Cryin’ in the Rain.” The performance, she said, would count as community service.

Now if that doesn ‘t prove the power of song, I don’ t know wha t does.

Next post: Our Grace Wells wins the Strong Award