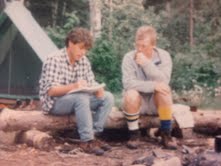 A classmate and professor of mine, in 1996, studying Boreal Ecology in Canada. As Mark Twain famously said: "All you need for learning to take place is a teacher, a student, and a log to s it on."

The scenario is real, and happen ing presently in New Marlborough, Massachusetts. Her article, “Let Kids Rule the School,” relates the case of eight public high school students, ages 15 to 17, who were entrusted by their school to develop the Independent Project. Rather than being merely processed through the system, inundated with pre-selected texts and evaluated by standardized exams, these students took the reins on their educations. They decided what to read, how to research a given scientific or philosophical problem, and generally what was necessary for them to know.

While they had faculty guidance, the students were ultimately responsible for themselves and one another.

My college program was run in a very similar fashion as the Independent Project. Students created their own curricula through a combination of seminars, independent study, and self-designed tutorials with the faculty. For example, if you wanted to know as much as you could about Franz Kafka, as I did when I was 18, you could read extensively on your own and meet up with a professor once a week to discuss what you’d learned.

Like some of the kids in the Independent Project, I was less than inspired by high school and my grades reflected it. But once I got to college, and was suddenly in charge of my own education, it all turned around. Unfortunately, that program, which began in 1969, graduated its last class in 2000, to the outcry of faculty and students alike. It was considered, by some, to be the quintessential liberal arts program.

Clearly, I’m biased, so I would like to know what others think about giving teens the power to decide what’ s be st for them. I’m guessing that plenty will think it’s a terrible idea, but to those nay-sayers, I offer this: had I not attended the undergraduate program I did, I am certain that I’d be less motivated, less independent, and less intellectually curious than I am now. And because of how my (very typical) secondary school was run, I almost never made it to college in the first place.

Or this: That program’s administrator, a woman in her mid-30s and a graduate of Yale University, married a man who graduated from the same program as I. As she said to me once, during my first year of college: “He’s one of the few people I know who still reads.”

Next post: Surprising correlations between Kundera and house building

Previous post: With Owsley’s death, will the 1960s fade even further into oblivion?