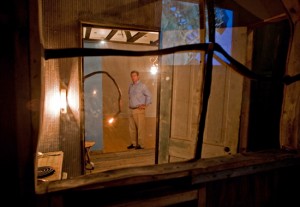 There is nothing funny or surprising about the things you let slacken when you’re overextended. I’m hard at work on my graduate thesis; it is the one taut thread of my life at the moment. It greets me in the morning with an open-handed slap, bullies me all day, and elbows its way into my dreams.

[Seriously: Last week I dreamed that a former teacher used my thesis as an ur-text for a seminar on failed novels. The teacher, brilliant in real life, a genius in my dream, relentlessly drilled upon weaknesses I’ve been willfully denying, and proposed radical but insightful revisions—a productive night, all things counted. Still, it was a working dream, stressful, humiliating, and baldly functional.]

When you focus your interior life so unswervingly on one thing, your sense of dimension and proportion warps: I know this. I see it in my work, a h ard-nosed unidirectionality—straight lines of forced coincidence, inevitability devoid of surprise, thickness of plot and thinness of emotion. The temptation to reach for an analogy as exhausted as I am—rock/hard place, Scylla/Charibdis, horns of a dilemma— is embarrassingly powerful.

Milan Kundera’s The Curtain has become crucial to my creative hygiene as my thesis and I strong-arm each other. It shakes me out of an undergraduate sense of single-mindedness, and reminds me that what I’m up to is less a matter of chasing characters down, Wile. E. Coyote-style, and more of a persistent searching for the best lens through which to view something elementally human—a lens that captures moments of intensification, when, through the haze of ordinary business, everything becomes suddenly clear and sharp and meaningful, and you feel things deeply.

Among the sections of The Curtain that consistently stops me in my tracks is the anecdote of the “three-woman day.” It’s a moment in the book that I love, then take exception to, and then love even more. Kundera, discussing the concentration of events in novels, contrasts the density of action, in which the novelist aiming to capture the complexity of a moment of life overloads a scene with event, against a different kind of density—what he calls the beauty of a sudden density of life. Here’s the passage:

It brings to mind the libertine Bohemia of my youth: my friends used to declare that there was no more gorgeous experience for a man than to make love to three different women in a single day. Not as the mechanical workings of an orgy, but as a personal adventure resulting form some unexpected confluence of opportunities, surprises, lightning seductions. That “three-woman day”—extremely rare, dreamlike—had a dazzling charm which, I see today, consisted not in some athletic sexual performance but in the epic beauty of a rapid series of encounters in which each woman, seen against the backdrop of the one before, seemed even more unique, and their three bodies were like three long notes played each on a different instrument and bound together in a single chord. (19)

Funny and somewhat wrong, yes. But what I love about this passage is that dual sense of singularity and unity: a series of episodes, each with its own drama, which, when considered as larger movements through time—movement through a day, movement through a period of life salted by such days—brings the reader and the narrator to a more expansive moment of arrival, not because the episodes are causally related, but because of the way the primary emotion—pleasure, here—accumulates, ripples back through the days remembered, and continues to ripple out into the future.

A beautiful thing about works of art that concern themselves with other human lives is the way multiple “personal adventures”—those of the subjects, the artist, and the observers of the artwork—become braided. This is another kind of density, a sudden coincidence of feeling that affirms the aliveness of those engaged in the making of the art—the artist and the observer—and of the work itself.

An example: A few months ago, Arizona State University Art Museum hosted an exhibition called Gravity Was Everywhere Back Then by filmmaker and artist Brent Green. There were two parts to the installation: a film of the same name as the exhibition; and a small neighborhood of plain wooden houses, each about the size of a one-car garage, with a larger, more elaborate house in the middle. Looped segments of the film played on several large screens, some of which were inside the small houses. The large central house was ornately wacky. It, and everything in it, including a wooden piano, was handmade, and bore the stamp of the eccentric sensibility of the architect. There was a two-story spire on top of the laundry room, and an enormous moon hung from the roof. A first-impression description might be: Seuss-ish. Whimsical. Marvelously creative. A pleasant shock of bizarreness in a city possessed by the compulsion to extrude the unfamiliar.

Brent Green didn’t design the house; it is his replica of a home built by a Kentucky man named Leonard Wood. The film and the copy around the installation inform you that Wood began building the house when his wife was diagnosed with cancer. Wood believed that he was making a healing machine which, if he got it right, would save her. But when she died, he did not stop building. For twenty years, in spite of being desperately poor, he kept building his house, room by room, until a serious fall forced him into an assisted living facility. Eventually, his neighbors put pressure on the town, and the house was leveled. Shortly before the wrecking ball swung, Green learned of the house from a friend, rescued Wood’s plans and a few artifacts, and reconstructed it behind his own home in Pennsylvania, reducing the balance of his bank account, as Wood did, to pennies.

The more you learn about the history of the house and replica, the more powerfully you feel that sense of whimsy bottom right out.

I would be lying if I said I visited the installation a few times. To even s ay I went often would be a half-truth. I didn’t visit on so regular a schedule that I had cause for recourse to clandestine behavior—wearing a disguise, or inventing false pretexts (lost wallet, lost mind). But I did start to feel a blush of guilt each time my husband asked where I’d spent my lunch, since the hour I passed wandering among the houses meant another hour perched alone at my desk exchanging blows with my novel.

Like a day, a house is a container for smaller units of space and time. Each room pursues its own shape, and is invested with particular meaning; together, they constitute a larger shape of movement and significance. Green layered his experience of building the house atop Wood’s: the meaning of these rooms to Green includes Wood, but it also, presumably, includes personal things; and I as visitor knowing Green and Wood’s stories, albeit incompletely, thought of them, and also of other things, other associated memories, to do with loss and desire—the awful gnawing desire for a tangible expression of love and grief. I suppose what got me, and continues to get me, about the installation is a perpendicular sense of shared commitment with the work and with the history of the work: the impulse to build, not for the sake of the product, but because the sustained act of building something, a large, perhaps bulky or labyrinthine thing, means you are still alive, still confused and alive.

Next post: You gonna let that goon push you around?