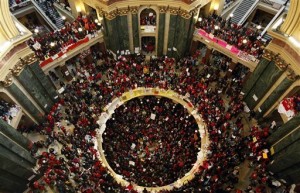 For the past week and a half, protesters in Madison, Wisconsin, have been lined up outside and inside the state capitol building protesting Governor Scott Walker’s proposed budget and its attack on union rights. In addition to asking certain state workers to contribute more to their pensions and health insurance, the bill contains provisions which would effectively cripple the ability of Wisconsin public employee unions to bargain collectively in any meaningful way.

State workers last week agreed to accept the terms asking them to contribute more to pensions and insurance, but have asked that the union restricting measures be taken out of the bill. Scott Walker has refused to compromise, indicating that his true motives are to bust Wisconsin unions. As if that wasn’t enough evidence of his dastardly motives, in a widely publicized prank call earlier this week, he admitted to a reporter pos ing as David Koch, a heavy campaign contributor to the newly elected governor who stands to gain from a provision in the bill that would make the process for private power companies, like the one Koch owns, to by public utilities easier, that his true aim was to negatively affect the abilities of unions to organize. Early this morning, however, Republicans in the Wisconsin Assembly rushed a vote to pass the bill. Now, the bill goes on to the Senate, still missing 14 Democratic senators who have fled to Illinois to halt the legislati on.

As a n ative Wisconsinite, I feel the need to weigh in. I’ ve watched the protests in Madison from my house in Tallahassee, Florida, and wish I could be there supporting the pro-union marchers. My father was in the Wisconsin Carpenter’s Union for nearly 20 years, and my step-father has been in the Wisconsin Plumbers & Steamfitters Union for just as long. I grew up in households that valued and benefitted from the rights of laborers to organize among themselves and bargain for better wages and better benefits. As far as I can see, a strong labor union is one of the only ways that working class Americans can retain a voice in an increasingly m onetized political system. As the gap between rich and poor in our country widens, we should all look to unions as a voice of the disappearing middle-class, and take heed when politicians try to destroy them. I say shame on Governor Scott Walker, and his republican cronies in the Wisconsin Assembly. People of Wisconsin: How about a recall ?