How the internet saved reading

Last week when my friend David Alm published his lament of digital publishing in these pages, I happened to be writing an introduction for a visiting writer. I recognized in my draft a soft rebuttal to David’s post, but I decided it had to complete its original mission before I could post it. This introduction could be trimmed into a more concise response to David, but because that visiting writer, Dana Goldstein, is a living example of the reason more Americans than ever are reading, I’ve left her introduction at the conclusion of this post. You should meet her:

I’ve been worried that universities would be the last to know.

Universities select and value faculty based in part on the publication of articles and books on paper. And many universities still teach students to write primarily for those media, the media of the printing press, a 15th Century technology.

• More than half of all U.S. adults (53 percent) participate in the arts through electronic or digital media, according to a 2008 survey by the National Endowment for the Arts. 2008 was a long time ago in internet time, so expect these numbers to be more striking today.

• For every type of arts performance… other than theater… adults are more likely to participate through electronic media than to attend events in person. So concerts, ballets, operas, dance—most Americans attend online.

When it comes to literature,

• 21 percent of Americans either read or listen to novels, short stories or poems online. That’s 46 million readers of online poetry and fiction, just in the U.S.

And twice that number,

Reading on the Rise

“For the first time in over a quarter-century, our survey shows that literary reading has risen among adult Americans. After decades of declining trends, there has been a decisive and unambiguous increase among virtually every group measured in this comprehensive national survey.”

All of the NEA’s prior studies of reading, for 25 years, had shown declines.

When it came time to explain the results, the authors of the NEA Reading Study could only speculate.

“The impressive new survey results raise an obvious question: what happened in the past six years to revitalize American literary reading? There is no statistical answer to this question. The NEA survey does not identify the causes either for adult reading or for changes in reading behavior.”

Follow ing that disclaimer, though, the study noted that a slight increase in book reading could not explain the results, but that there had been a sharp increase in young people reading online.

And about that slight increase in book reading…. It occurred among people who read online. As if reading online were leading readers to books.

Power to the People

The changes have been most dramatic in journalism, of course, where we know that the overwhelming majority of Americans (92 percent) now use multiple platforms to get their news—they use television, the web, their mobile phones, the radio, and still the occasional newspaper. This is according to a survey released last year by the Pew Research Center and the Project for Excellence in Journalism.

Television news is number one in that study. Internet news sources come next.

More telling is that more a third of Americans (37 percent), have participated in journalism by commenting on, disseminating, or covering stories themselves.

I’ve seen writers accustomed to publishing on paper unable to hold readers who can click away at will, and I’ve seen paper writers lose their composure when confronted with readers who are empowered to respond.

But we still love paper, don’t we? Most of us? and we love the writers who write on it. We don’t want paper to go away, as long as it’ s recycled paper. We love how it feels and how it folds. We love the smell of ink and the musty aroma of used bookstores.

That lovable world can feel terribly still, though, like a pond, once we’ve waded into the rushing stream of online publishing, where hundreds of millions of writers are publishing and interacting every day.

But we remain fond of that pond, most of us.

So when we selected this year’s Emerging Writer in Creative Non-Fiction, we looked for someone who excelled in both realms, not only in the traditional ink and paper media but especially in the dynamic new world of online publishing.

Finding a writer who could swim in both pond and stream was not at all difficult. A few came to mind, but none more immediately or prominently than Dana Goldstein. 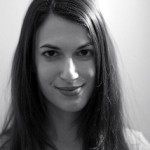 The arc of Dana’s still young career, across the chaos of this media upheaval, yet unimpeded by it, is a model of navigation for aspiring writers.

She’s written for The Nation and Businessweek, but also for Slate and for The Daily Beast, where she served as an associate editor.

The Daily Beast, which you may have heard recently merged with Newsweek, is the online platform where I came to know Dana’s diligent and expert coverage of education.

People to whom the internet is still foreign have tended to judge it rather bizarrely as if its contents are of uniform quality. But the internet is no more consistent than print. There is excellence, and there is the less-than-excellent.

Remember that twice as many online readers read non-fiction as read poetry and fiction. I suspect that happens because such a competitive forum—where some other text is always just a click away—lends itself best to forms of prose that reveal their intentions quickly—the expository, the argumentative, the journalistic.

What floats atop the internet, above the less-than-excellent crowd, is substantive content, expertly researched, effectively and elegantly expressed… and cogently argued.

Those are qualities at which Dana Goldstein excels.

She grew up in Ossining, New York, alongside the Hudson River.

I mention that because she writes most personally about going to school in Ossining, where her passion for her topic took root. In her career she has written frequently on women’s issues, public health, and American politics, but there’s a deep interest and fierce clarity to her work on education:

“I became an education writer in large part, because I attended the public schools in Ossining, New York. Due to a unique integration/busing program that has been maintained throughout the decades, even as other districts reverted to segregated neighborhood schools, the district is currently 39 percent Hispanic, 38 percent white, 18 percent black, and 5 percent Asian. About a third of students are eligible for reduced-price or free lunch.

“So day after day for the 13 most formative years of my life, I (and every other kid in the Ossining schools) saw up close the achievement gap between middle class, mostly white students and everyone else, and the ways in which the school system attempted to fight the problem while, in some cases, exacerbating it.”

After Ossining High School, Dana attended Brown University, where she studied European history, and following a year in Paris and four in Washington D.C., she lives in Brooklyn.

She’s a Spencer Education Journalism Fellow at Columbia University, spending this academic year as a writer at large there, studying the Obama Administration’s education policy with typical intensity, and contributing to national publications on education policy, on schools, on teachers, on children, and on poverty.